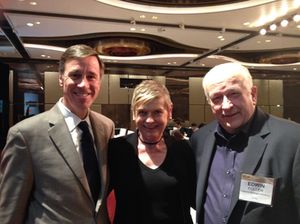 From time to time industry events pop up that are essential for the Girlahead agenda.  One such, among the top of the list, is the annual Hotel Investment Conference Asia Pacific, known as HICAP. Now into its 24th year, it has become an institution at the Hotel InterContinental Hong Kong.  This is where the top players not only come but interact – see, here, Marriott President and CEO Arne Sorenson, and a former Marriott legend, Ed Fuller. Apparently at the two big conferences in the USA, one of which the gal does not want to go to and the other, at the celeb-full Ritz-Carlton LA Live in Los Angeles, which sadly never fits her diary, the A-listers in the industry do all their meetings behind closed doors in bedrooms and suites. 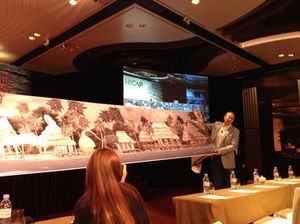 Bill Bensley, right, unveils a scroll of a future project

The most riveting speaker at this year’s HICAP was designer Bill Bensley, associated with, say, both the St Regis (pool terraces) and The Siam (whole hotel) in Bangkok, where he lives. Why was he riveting? His one-man theatrical show, that had no need of an interviewer, included showing card mockups of architectural projects done when he was in school. At one point he leapt off the stage – a metre high, by the way – as if he were a Cirque du Soleil artist.  Why? To help unroll the 50-feet scroll that he always produces for clients showing a panorama of a particular project. 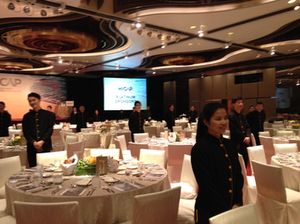 The ballroom at Hotel InterContinental Hong Kong becomes a fast-moving stage-set during the three days of HICAP.  You can have a session in there, move elsewhere and two hours later the ballroom has been reset for lunch. The brigade of waiters, all wearing earpieces to be instantly in touch with the commander, stand by their appointed table, all ready to go.  If you are vegetarian, you put the card they gave you when you arrived on your plate.  Zip zip zip.  It is said that for weeks before all the 700 (or so) employees here practise, and come up with ideas, for HICAP. 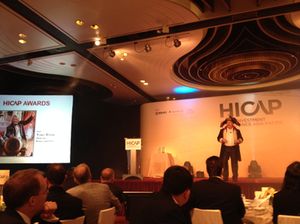 At lunch on the final day, fake smoke and pompous music announced the arrival of Tony Ryan, an Australian lawyer who always dresses up, every year, to get people’s attention.  Today he is Napoleon. Tony Ryan literally lives in the fantastic PARKROYAL on Pickering, in Singapore – the one with curvilinear terraces with living gardens, and the terrace swimming pool with lounging cabanas cantilevered over the void below.  That is the hotel that won two of this year’s top awards, for stunning new business development, and for sustainable construction and, no, Tony Ryan was not on the judging panels. 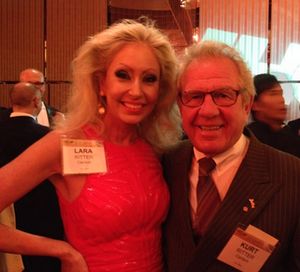 But people dress up, in their usual business best, for HICAP. As anyone who has ever met her would guess, Lara Ritter would have won one of the top fashion prizes if there had been one.  One night it was a bright, almost day-glo, scarlet sheath dress in mock crocodile leather fabric, and of course her bag matched.  Another, daytime, ensemble was emerald green, with matching earrings.

The other top fashion contender, Linda Stiles, co-organiser of the conference, stuck to black, or white, usually plain bandage, tight as you can get, dresses.  On the male side, grey suits, with plain ties, seemed to be the uniform. 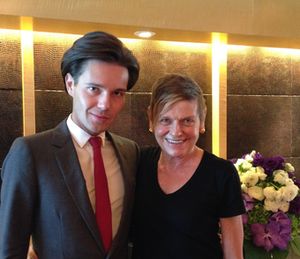 Oleg Kafarov managed to escape from manning the Jumeirah stand

Here, straight from the Jumeirah stand that he was manning, is Oleg Kafarov.  Yes, all those companies that take exhibition stands have to have someone in charge.  A tremendous number of people work very very hard to make HICAP such a success, and that group includes the people of this luxury hotel… I am sure they, like every serious investor, developer and hotelier in Asia, undoubtedly the most vibrant area of the luxury hotel world, has next year’s HICAP already in their diaries (October 15-17, 2014).