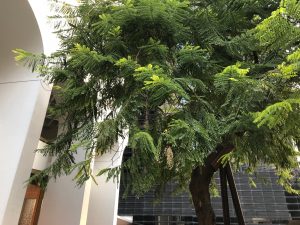 More art in Hong Kong, at The Murray, a Niccolo Hotel, a luxury hotel that occupies a rare place in the history of 20th century Hong Kong.  It is a conversion, by Wharf Hotels, of the Murray Building, Hong Kong’s tallest structure when it opened in 1969. It was designed by architect Ron Phillips so that all rooms’ windows were angled to allow maximum shade during the heat of Hong Kong’s day. The basic shape has been retained, by current architects Foster + Partners, and so has an historic tree outside the main entrance.  Now, as a 336-room hotel, this is also a magnificent art gallery. One of the gal’s favourite pieces is shown above, a shapeless shape, if that is not an oxymoron, a glitter stainless sculpture by the President of the Hong Kong Sculpture Society, Mok Yat San, born in Guangdong in 1968. 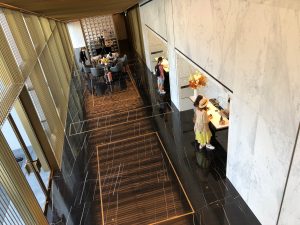 Look down at reception from a 2017 walkway

The hotel is, as is so typical of this Central area of  Hong Kong Island, interlinked by walkways with neighbouring buildings and with a footbridge that takes you over Cotton Tree Drive to Hong Kong Park, a really splendid green area that incorporates the zoo and areas of botanic gardens.  Taking one walkway out of the hotel, I was able to look down at front desk, which is actually four separate alcoves each hosting three terminals that can be activated as demand warrants – the conversion into hotel has lots of clever features, testimony to the creativity of both Wharf Hotels’ President, Dr Jennifer Cronin, and also the opening GM, Duncan Palmer, who has now moved on to play with his vintage cars in the wilds of south-west England, 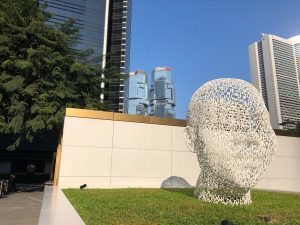 I continued out of the above walkway to the terrace which holds the Mok and also a three-metre tall fretted head by Barcelona born Jaume Plensa, 65.  Apparently it is based on a nine-year old Dominican girl and is supposed to imply that keeping beauty within inspires inward reflection.  Back in the hotel, I went up to the top, 26th, floor to Popinjays, a lovely all-purpose space with a large terrace – when I was at The Murray recently, for the annual meeting of the Global Hotel Alliance GHA, we had a memorable welcome dinner up there (as I know from cruising, it is always special to be able to have drinks, if not dinner, outside). 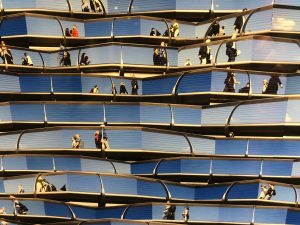 This visit I was in 2207, a very well thought-out suite, ideal for a busy workin’ gal.  Just outside my room, in the 22nd floor elevator lobby, was another memorable artwork, a painting of people on a many-floored building, one of a series by a Korean female, Lee Ji Yen.  The more I saw this work, the more intriguing it became.   But honestly, as I told the hotel’s GM, Adriano Vences, on departure, my favourites of all this luxury hotel’s art works is the Mok shape. NOW SEE MY SUITE, AND THE JUNK RIDE WE TOOK ONE EVENING