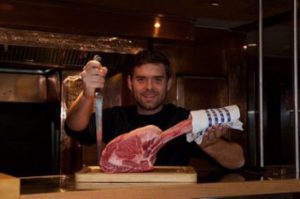 From June 9 – August 31, 2017, the luxury InterContinental Hong Kong hotel’s  STEAK HOUSE winebar + grill will showcase the  imported vintage French beef products from Alexandre Polmard of Boucherie Polmard, which is on rue de l’Abbaye in Paris’ St. Germain-des-Prés. A farmer, breeder and butcher, Alexandre Polmard is the sixth generation running his family’s business, founded in 1846. His father and grandfather revolutionised the way meat is aged by creating a special treatment called “hibernation” in which cold air is blown over the meat  in a -43C enclosed space at a speed of 120 km per hour, for a feeling of -120C. While dry-aged beef is typically matured for just several weeks, every cut of beef from the “Boucherie Polmard Paris” uses this hibernation method to freeze and preserve beef for up to 15 years of aging while retaining the quality, flavour and texture. Blonde d’Aquitaine cattle are raised on the Polmard family’s farm in Saint-Mihiel, in north-east France, and only four cattle are butchered per week. Once butchered, the cuts of beef are prepared for hibernation at the property’s on-site laboratory.  At STEAK HOUSE winebar + grill, dishes will include such starters as Beef & Tuna Tartar with French Fries, and Beef Maki with Black Truffle and Oscietra Caviar, and main courses of the mouth-watering calibre of eight-ounce Petit Filet Mignon through to a 35-ounce Long-Bone Rib Eye