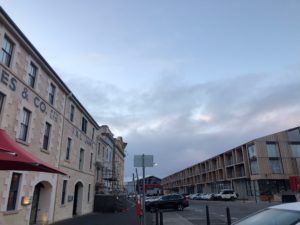 Back in Hobart, the gal experienced another of Tasmania’s extraordinary luxury resorts, the Henry Jones Art Hotel.  Like Saffire Freycinet, it is owned by the Farrell family’s Federal Group, which also has a new-build MACq01 hotel opposite (this is called because it is on Macquarie Quay slot 01). The Henry Jones, as its name implies, is filled with art, some 400-plus pieces in all, and I especially liked the one above, Woods, by David Keeling, one of the winners of the annual John Glover Prize for aspiring Tasmanian artists (there are many original John Glovers around the hotel, too).  Complementing the art is the building itself, a conversion of the jam factory started in 1869 by George Peacock. 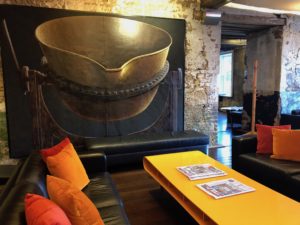 The factory was later sold to Henry Jones, who had began his own career at the age of 12, sticking labels on jam tins.  He worked his way up and built what became Henry Jones IXL Jams into a global phenomenon.  The Federal Group brought the dilapidated three-floor buildings, in a C-formation around a central courtyard which has now been glassed over to create a massive conservatory. In the main arrival lobby are two massive artworks, specially commissioned and done with kids’ crayons – the one shown here is a jam urn. Taking the building as a whole, along one long side, looking straight over Hobart’s Victoria Harbour, and along one short wall are, on two upper floors, a total of 56 rooms. 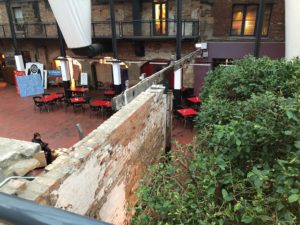 Looking down into the centre space

I was in #212, a front-facing attic: the video below shows how some of my walls were bare stone, dating back to the beginning of the factory. Half my ceiling was corrugated iron, the rest wood. All the public areas are recycled and/or retro. Look how some bits of old wall remain in what is now the conservatory, nestled in with a herb garden, and living bushes, and seating that can be moved around as needed.  Around the periphery of the conservatory space are galleries selling Aboriginal art and other works, and a popular IXL Long Bar, tended by a renowned mixologist. And at one end is Peacock & Jones, the restaurant named for the factory’s two owners, George Peacock and his successor, Henry Jones. 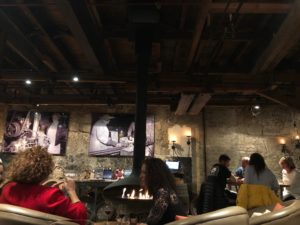 Looking into the restaurant

This is a LOVELY restaurant that gives the luxury connotation to this fascinating hotel. There are extra-high tables, normal-height tables and low coffee tables, all with suitable seating.  A ceiling-hung modern wrought-iron sculpture holds a working fire. The customers are locals, anniversary couples and groups of girlfriends, all having a good time. I was brought an amuse, a one-bite choux pastry topped with truffle. I had a local burrata, with beetroot and currants, and then, the highlight, grilled wallaby – probably from a Flinders Island farm. It was soft as veal but more flavourful, and it went marvellously with Brinktop Killara 2017 Pinot Noir.  In the morning, I walked past a statue, Footsteps 2017 by Dubliner Rowan Gillespie, commemorating the 13,000 convict women who were brought to what is now Tasmania in the early 19th century.  I finished my Federal Group experience with breakfast in MACq01 hotel, cantilevered over the harbour. VIDEOS SHOW ROOM #212, THE HOTEL’S CENTRAL COVERED COURTYARD, AND A SNIPPET OF THE REGULAR HISTORY AND ART TOUR