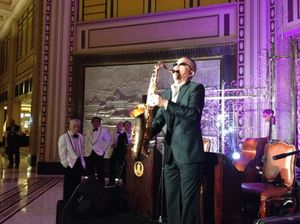 Play it again, and again. In fact the jazz band at Fairmont Peace Hotel, Shanghai, has been playing for nearly a century – the Russians introduced jazz to Shanghai and this luxury hotel remains the key venue. This particular group has been playing, nightly, every night, since 1980, and one player is 90. The movie As Time Goes By in Shanghai about our Old Jazz Band, shown at the 2013 Shanghai and Toronto film festivals, included this sextet making an official visit to the Rotterdam Jazz Festival. The gal is entranced by how eternally young the players all seem. It is their life. 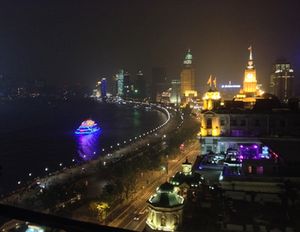 ILTM’s rooftop party sure had a view!

Fairmont Peace Hotel hosted the official party of this year’s ILTM. The rain conveniently stopped, it was a glorious night, and the near-thousand guests graduated from one to another of the many public areas, and up to the rooftop terrace. There, it was possible to see along this particular stretch of the Huangpu river, looking north to The Peninsula and south as far as Indigo. As always, tourists’ dinner boats were lit up in dayglo colours. As always. hotel GM George Wee had laid on entertainment, which tonight included magicians and stiltwalkers, though fortunately they were not on the rooftop.

And by day – George Wee at breakfast

What seemed like only a few hours later, we, the two of us, had breakfast on the ninth floor terrace-for-two, cantilevered out from the Cathay Restaurant. We were high above the Bund, looking across the river to bustling Pudong. Nearly every night this terrace is booked, for proposal dinners, for anniversaries and other celebrations – there are also two terraces from the side of the restaurant, one seating six, one seating eight, both ideal for family gatherings or groups of friends. There is something very special about having a perfect cup of coffee looking out at a dozen or so paper kites soaring high overhead. 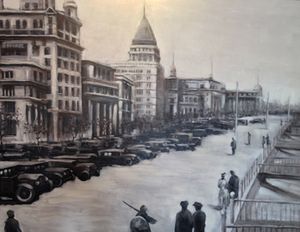 The Bund, in olden days

Chinese men have had the same hobbies for years. Some are passionate about songbirds, listening to their chirper for hours on end, taking it to the same park, every day, to show off to other bird-lovers. Others are crazy about kite-flying, and you see them every day, from earliest dawn, flying their kites to astonishing heights. I have a painting of The Bund in my room here at Fairmont Peace. This, number 888, is in fact more than a room – it is the former private home of Sir Victor Sassoon, all 3,000 sq feet of it, which includes two ensuite bedrooms and dining for ten, and a total of 25, yes 25, windows. Sir Ellice Victor Sassoon GBE, 1881-1961 was a Sephardic Jew. He was injured in World War I, when he served in the Royal Flying Corps, as a result of which he walked with two sticks, throughout his life. He built up a formidable Shanghai-based conglomerate of real estate and trading – one of his employees was Lawrence Kadoorie, who went on to found Hong Kong’s China Light and Power, and The Peninsula group. 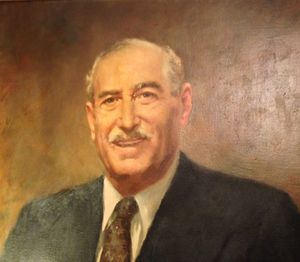 He had built this 11-floor tower, on the corner of East Nanjing Road with The Bund, in 1926 (it cost $5 million and was designed by Tug Wilson), and in 1929 opened it as The Cathay Hotel, in honour of another hotel of the same name he owned in Hong Kong. It hosted such guests as Charlie Chaplin and Doris Duke, and in 1937 it was bombed. In 1941 it was taken over by the Japanese, and in 1951 the Chinese government took it – it is now owned by Jin Jiang Fairmont Hotel Management Company, basically local government. Apparently Sassoon loved sitting in this Shanghai apartment and looking across the river, at Pudong, in those days acres of mango plantations and rice fields. Sir Victor, who succeeded to the family baronetcy on the death of his father in 1924, used to look across, and think, and plan… 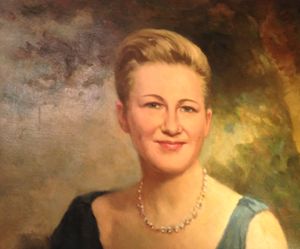 In 1941 he was forced to flee from Shanghai, and set up base in the Bahamas. In 1959, he finally married. The new Lady Sassoon, Evelyn Barnes, an American known as Barnsie, was his private nurse. Two years later, with his death, the baronetcy died out. He would be delighted that when this luxury hotel reopened in 2010 under Fairmont management that his apartment, now as suite 888, would be so desirable.