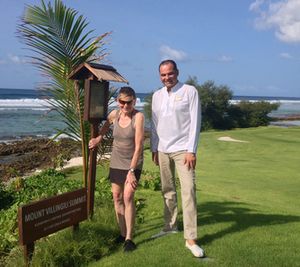 Rene Egle at the summit of Mount Villingili

Some say the highest point in the Maldives is under three metres but facts and figures for this incredible nation sometimes vary (how DO you accurately measure a string of islands that is 750 kilometres from north to south?). Here the gal is shown what Rene Egle, GM of Shangri-La’s Villingili Island Resort and Spa, says is undisputedly the tallest mountain of all. It is a full 5.1 metres above sea level. It is also on the only golf course in the entire country. Guests here can play nine gorgeous holes including, successfully, one hopes, the fourth which needs a leap, by the ball at least, over a mini lagoon. I had read that Prince Andrew, no less, had stopped off here, presumably for a round or two. 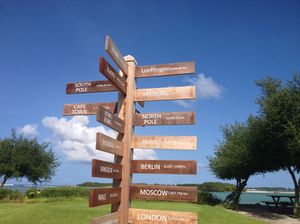 Mileage to North and South Poles, and London

You are at the most southerly point of the Maldives, two hours’ by boat south of the Equator, and 542 km south of Male. A signpost alerts you to distances. Fascinatingly, I am almost equidistant from London (8,933 km), and the North Pole (10,095 km) and the South Pole (9,914 km). It must have felt like the end of the earth 60 or so years ago when this was a strategic command post, ensuring the safety of traffic between Europe and Asia. RAF platoons from the UK built an airstrip on Gan island, now only six minutes away by speedboat, and were stationed, a year at a time, 12 men and a female psychologist, on this lonely jungle island. Somehow they even kept a football team going, playing locals from nearby islands. They built an Astra performance centre, for drill parade and movies, which still exists – RAF centres were always called Astra, from the RAF motto, ‘Per Ardua ad Astra’, through work to the stars. 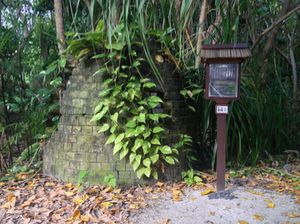 One of the cold war historic relics

Relics of those cold war days are still here, on Villingili, and carefully numbered. Take a history walk, by yourself or escorted. One tumbled-down stone pill-box, for defending against marauders, is built into the base of one of CHI Spa’s treatment villas – as if remembering how a psychologist was needed all those years ago, I went to a brilliant Fijian therapist, Janny, for a truly sensational pressure-point relief of tension in my shoulders. Were she not there, she said, I would get migraines from work-induced tension (work, here in the Maldives?). Were my Porsche Rimowa four times the size, I said, I would wrap her up and take her home. 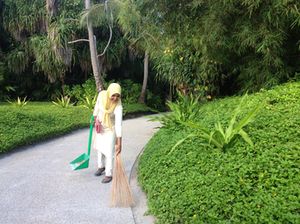 There are lots of ladies among the 600 staff, most of whom commute from an island 20 minutes away, who look after this 142-room resort. The road sweepers are hazards. They are highly skilled at talking nonstop on their mobiles as they sweep, which means they do not hear traffic, namely buggies and bikes, coming. There are, by the way, tarmacked roads here. Another unusual feature, among the islands of the Maldives, is that this is jungle land. The trees and undergrowth are indigenous and mature. Why not dine in the jungle, I was asked? In fact we dined, right next to and over the water, in the ship-like Fashala, tonight offering a fairly uncommon just-caught parrot fish to follow the tuna tataki. 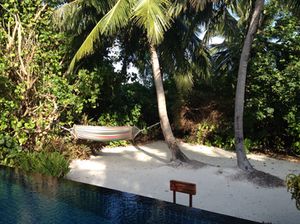 There is tuna everywhere. Rene Egle, who soaks up knowledge, particularly if it is anything to do with history, tells me breakfast for the locals is typically shredded tuna with chapatti breads. His chefs provide cooking classes for ladies on Meedhoo island, 15 minutes away, who need to learn how to use the eggplant and other ‘new’ produce grown for the hotel by local farmers, and sold to the villagers. The lessons, he says, must be in Hindi, the only common language. He sends Indian chefs over, and his students have learned Hindi from and Bollywood movies in Astra and by watching Indian soaps on their latest-model televisions.  I never even turn on the Samsung in villa 209, by the way – it is beach-set, with a separate air-conditioned ‘lounge’ with Taittinger in the mini bar, Moët in the ice bucket. I am continually throwing myself into the pool, for yet a few more laps to prevent future tension. 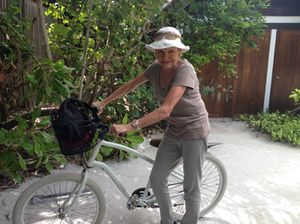 One last ride, down to the boat to the airport

I cycle to the chef’s garden, wishing I could pick some of those giant papayas hanging down from trees that do not look strong enough to support them. I cycle past the watersports centre, watching a pair of Chinese honeymooners enjoying their complimentary kayaking: I see others getting ready for a snorkeling session. And, when it is time to leave this fascinating luxury hotel, I cycle back to the jetty, for my departure boat, following my lovely butlerette, who has taken my laptop and the Porsche Rimowa, and no, I did not even attempt to get Janny in it. One final point: stay here, and when you fly into Gan airport, or fly out of it, you are VIPed via its private jet facility, managed by Shangri-La’s Villingili Island Resort and Spa (and if you come with a private jet rather than on a scheduled carrier, there are all kinds of privileges.