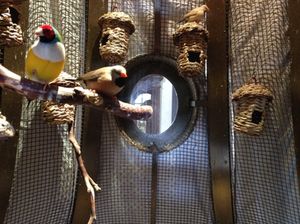 Songbirds, completely at home in the lobby of…

Somehow birds maketh luxury hotels.  The Belz family discovered that years ago with the famous ducks who paraded in, every morning, and out every evening at The Peabody in Memphis TN. In Montreal, the Torriani family, who now run the historic Ritz-Carlton on Sherbrooke Street, have a succession of baby ducks, all summer long, in the rear garden pond.  In London, The Rosewood has birds in cages by the elevator lobbies.  In Coral Gables FL, two cages, about six feet tall, in the imposing lobby of the amazing Biltmore allow you to look in to see song birds and their houses. The gal was amused. 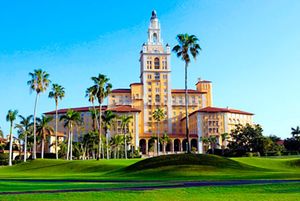 Oh what an amazing building this Biltmore is – Florida’s tallest when it was completed in 1926 by architects Schultz and Weaver – who also worked on the Atlanta and Los Angeles Biltmores and, in New York, The Pierre, The Plaza and the Waldorf-Astoria. It was commissioned by Biltmore enthusiast John McEntee Bowman and Coral Gables county commissioner George Merrick, a Pittsburgher who is today credited with building the entire Coral Gables community (you can visit his own tiny house, at 907 Coral Way). Today, my favourite suite is 1300, a two-floor beauty in the central tower: unusually, the upper floor is a gallery going right round the cathedral-like area below.  This has a grand piano – did Bill Clinton play it when he stayed here? 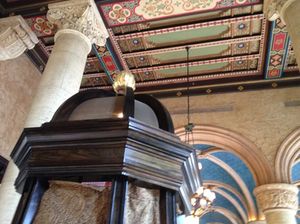 Looking up past a birdcage to the lobby ceiling…

On January 30th 2014 his name was mentioned when John Moeller, a former White House chef, hosted an interactive culinary evening here (this means he showed how to prepare dishes, which each table-of-ten then had to do, cooking their own dinner). Apparently Moeller mentioned that Clinton was quasi-coeliac, before he became the vegetarian he is now, and George Bush senior would never eat his broccoli.  Back to this amazing building.  Look up, above the two birdhouses to the soaring ceiling of the lobby above.  After George Merrick pioneered the place, it later became a WWII and veterans’ hospital, a medical school and it fell into empty neglect in 1968. 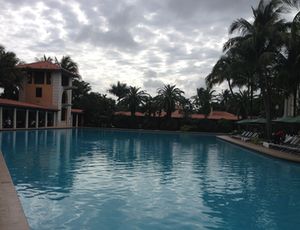 In 1987 it was re-opened, thanks to grants and local support.  Another of the Miami area’s Leading Hotels of the World, it is now owned by Seaway, led by Bob Kay and Gene Prescott, not coincidentally the current hotelier of the year, honoured by the Florida Restaurant & Lodging Association on January 8th, 2014. The attention to detail is magnificent. The guy who runs the place, Matthias Kammerer, must have armies of painters and gardeners to manage the 150-acre estate.  Look at the size of the open-L swimming pool, heated year-round: a tower one end used to have high-high diving boards and before he became Tarzan, Johnny Weissmuller was a swimming guard here. 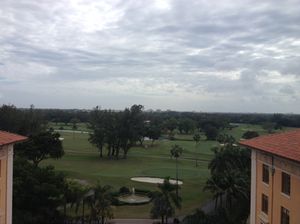 Look down from the spa…

Look at the Donald Ross golf course as you are up in the seventh-floor spa, a really serious affair with 14 treatment rooms and a Zen Suite that holds eight, for girls’ or guys’ nights or days out.  Not surprisingly the Coral Gables locals love this place – there are a staggering 6,000 members, who play golf, swim, or come to Fontana for tasty Italian looking out from a convent-type colonnade, or gastronomic French in La Palme d’Or.  They come to the gym, a big poolside room with an impressive array of over a hundred classes every week, and to Joseph Adler’s GableStage Theater, which is based here. 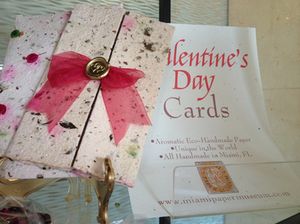 They also come to the spa for such delights as February’s pedicure of the month, with salted-caramel chocolate (no, I do not get this either, but it is certainly original). There is lots of creativity here in this spa.  A display case suggests spa vouchers for mother’s day, with individual scrolls and bags made of paper from flowers off the Biltmore estate.