Sometimes the gal – yes EVEN the gal – is so tired on her world travels that she just has to have a little lie-down.  The relaxation beds in Eforea, the spa at Hilton Baku, are so inviting it is impossible not to.  And to look out at the view, of course.

Here you are on the 22nd floor of the hotel, looking way down at the beautifully busy Boulevard below and the [intlink id=”eurovision-baku-azerbaijan-luxury-hotels-aplenty” type=”post”]Caspian Sea[/intlink] beyond.

Travel directly east across it on a ferry for 18 hours or so and you reach Turkmenistan but that is for another trip.  Meanwhile, here we are in fashionable Baku.  Yes, how about these blue slippers, right?

Arrive at the entrance to Eforea and you are invited to put both feet, one at a time, into a miniature coffin-in-a-silver suitcase. Press your foot down hard and pop, a bright blue ‘shower cap’ pops over your shoe. 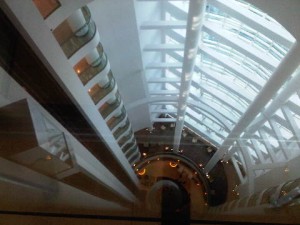 You can now go patrolling round this beautiful spa, which has eight treatment rooms – the Couple’s Room has not only a big tub, a sauna and so on, and of course two massage beds, but also a proper double bed to sleep in.  Another first, here at Hilton Baku.  Arrive single or double, any room, and you have a choice of seven different lighting styles. Good stuff, as is the serious pool.

The owner of this hotel is a certain Khalilov Iskander, whose company ISR Group is into, well, chemicals, gas, minerals, oils, plus Lukoil, river-sea tankers and Toyota.  It is amazing he has time to think about hotels but it is also certain, he’s a clever operator.

He already had a lifestyle hotel, the Park Inn, on this site on Neftchilar, the main street running alongside Baku’s pedestrian-only [intlink id=”a-typical-24-hours-work-sorry-pleasure-in-cannes-for-iltm” type=”post”]Boulevard[/intlink], modelled on that of Naples (the Italian one, of course).

The Park Inn did well so he put up a luxury sibling immediately next door, and, while he was about it, he signed the Hilton Bodrum in Turkey. This one looks from the outside like a 25-floor Lego block, built of yellow sandstone and dark blue glass bits. Inside you are in for a treat.

The lobby is circular, and open up to the 21st floor.  Five glass-sided elevators soar up to the 24th floor, and on each level, to call them (since they are obviously at an angle) you punch in the floor you want to go to, watch what letter is given and then run round to, say, E, before the cabin’s doors have closed and it has gone again.

This of course causes lots of problems.  Important People get in, forget they needed to punch in their required floor beforehand, and then wonder why they go up and down and down and up, which is all very good for the old maxim that there is no such thing as bad publicity.

We soared up, intentionally, to 360°, the rooftop revolving bar.  It takes an hour to do a complete circumnavigation.  I stood with one leg on the revolving part, one on the outer static part, and after five minutes was doing unladylike splits.  We went down 30 glass steps to Sky Grill restaurant, which has a divine outdoor terrace, summer only.

One side of Hilton Baku's glorious pool

Thank goodness it has permanent glass dividers as Baku is not called ‘the windy city’ for nothing (it makes that other windy city, Chicago, seem like a deflated windsock).  Sky Grill is sadly closed tonight, so we head down to the ground floor, to Cilantro, where the special breakfast buffet room is closed at this hour.

There is a good chance at this 300-room luxury hotel that most of the employees not only know your name but use it, pronounced correctly (they are led by a bubbly Venezuelan, Manuel Avila, and no, we did not even mention Chavez).

You put a shoe into the small metal 'coffin', press hard - and a blue plastic overshoe pops out over YOUR shoe

We were too busy talking about [intlink id=”strandveld-vineyards” type=”post”]food and wine[/intlink] and Cyprus, where he had last been, and about 170 European MEPs who seem to have descended in town on some kind of factfinding thing or other, or whatever MEPs do  (I see the sort-of Foreign Minister of the EU, [intlink id=”potpourri-memorable-luxury-travel-experience-australia” type=”post”]Caroline Ashton[/intlink], has just appointed a Dane to give her a makeover, on a salary of £150,000 a year – he has a tough job).

The gal would rather be made over here, in Eforea, but which to choose, [intlink id=”true-acapulco-luxury-is-fine-food-and-a-hotel-that-has-everything” type=”post”]Kerstin Florian[/intlink] or, from Australia, Li’Tya or VitaMan – no, sorry, that last is guys only.

At Eforea Spa at Hilton Baku (notice the blue overshoes)

I give up, and punch 2 and 1 into the elevator pad, to soar up to 2116, in one of the two arms stretching from the semi-circular elevator lobby.  Room 2116 faces west along the crescent-shaped coast.  It is light and bright, with a big desk and, as welcome, fruits and macaroons.

The toiletries are Hilton’s standard, [intlink id=”champagne-pops-on-amsterdam-canals-and-luxury-dining” type=”post”]Peter Thomas Roth[/intlink], where packaging is not all the same.  Shampoo, for instance, is a dark green tube while body scrub is just that, orange-scented liquid with scrub bits in it, in a bottle. It all feels very friendly, just like this clever hotel.