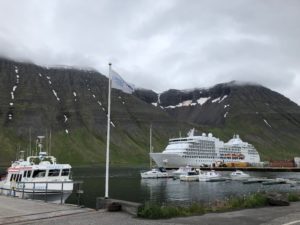 Marvellous news for Regent Seven Sea Cruises – it has won the ‘best small ship’ accolade at Signature Luxury Travel & Style’s 2018 Cruise Awards. Judging by the style and quality that the gal has been experiencing on Regent Seven Seas Navigator, this is more than justified.  Here is the ship, in Isafjordur (ice fjord, or fjord of ice), at the north-west tip of Iceland.  With a population of about 2,600, this is the largest town of the Westfjords, and the ship made a day stop, which was the perfect opportunity for a solo hike.  It certainly was not a day for hotel-visiting.  The first I found, the Isafjord Hotel, could only show me a room on its website (surely it was not full?) and the other had its front door firmly locked, ‘for security’. 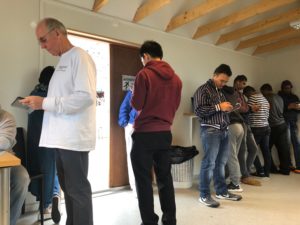 The harbour is flanked by mountains, which meant the ship’s satellite link was not working. No television today, folks, and no WiFi either. Fortunately the thoughtfulness of the harbourmaster and the word-of-mouth knowledge of all who work at sea meant that, soon as it was possible and they were off-duty, crew rushed down the gangplank to a small wooden hut on the dock which had excellent and free WiFi (with typical courtesy, a young Filipino whom I know had served me breakfast a couple of hours before insisted on giving up his seat so that I could ‘work’ in comparative comfort). 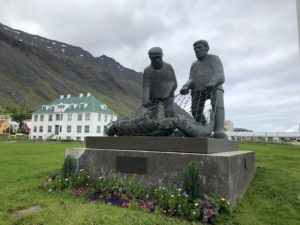 And then I started walking, wearing two pairs of trousers for warmth, and carrying two full bottles of water, for extra muscle exercise.  I walked in a C-shape around the harbour, past the Culture House, designed in 1925 as a hospital by Guojon Samuelsson – who also did Reykjavik’s famous Hallgrimskirja church – and reopened in 2003 to house the city’s archives. I loved the statue in front, of two fishermen with a net full of fish.  Round the other side of the C I started climbing, up a gravel path flanked by what seemed like acres of purple lupins. They were introduced into the country only 70 years ago, apparently, to help prevent soil erosion, and now they are rampant. 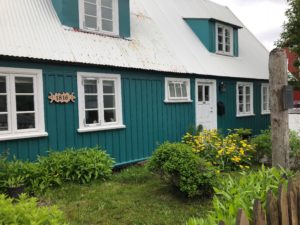 On the way back to the ship I stopped at the Isafjordur supermarket, Nettó, fascinated by Driscoll’s berries, from USA; by Amy’s soups and a range of peanut butters, from England; and by Icelandic wool socks next to men’s underwear from Sweden. Vacuum-packed fish and meat were local, and hamburger patties come complete with buns. Interestingly all the shoppers seemed, like the supermarket workers, to be male.  Attached to the supermarket are several restaurants, a bank and the city post office, all staffed by women. Continuing walking I passed many of the town’s older houses, most with roofs and exterior walls of corrugated iron (before, most houses were clad in turf).  Some of these corrugated houses were dated, going back to 1816 or before.