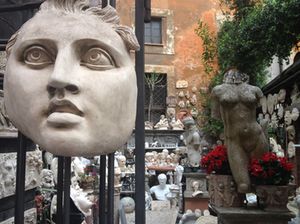 Walking around central Rome is most agreeable when you avoid the main tourist throughways (thinking of joining the throng at the Vatican? Forget it…). The gal loves the little side streets. Look in at little holes-in-walls that house workshops making and replacing keys. Look in through gates, which might lead to storage areas for supposedly-old classical heads, some of them perhaps designed for gardens of luxury hotels or private villas. If you want an ATM, why not head for the one in the central post office, a gem of a classic building, with frescoed ceilings, set around a beautiful garden. It must have been there for ever. 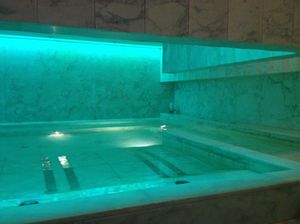 Rome’s heritage authorities are meticulously strict and it can take forever to get planning permission for something new. This day-glo hydra bath in the basement of Jumeirah Grand Hotel Via Veneto was part of a process that took six years, says the hotel’s owner, Carlo Acampora, an entrepreneurial lawyer who bought a five-floor building, on Via Veneto, from a bank. He inherited 37 tenants, which required managing relocations as well as diplomacy with those heritage authorities. 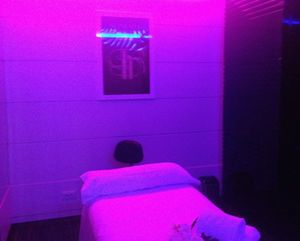 He has put in one of the most futuristic spas in mainland Italy, with dayglo massage and steam rooms, the only Sisley partnership in the country, and a really well thought-out gym – Technogym, of course, to keep it in the Italian family.   A lot of the glass throughout the 122-room hotel is Murano, and the marble, not surprisingly, is Carrara. For design style, however, Carlo Acampora, who seems to have done it mostly by himself, has turned to France, copying the pre-Art Deco flourishes and use of amboya burl advocated by a Parisian, Emile-Jacques Ruhlmann. 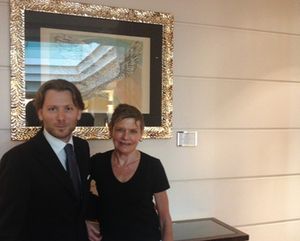 Carlo Acampora in front of a Picasso

There is a Dali here, a Picasso there (and where is the Miró?). Carlo Acampora taught himself hotel-keeping by reading, whatever he could find, he says. He wanted the ultimate luxury hotel, and signed with Jumeirah because of its ‘stay different’ tagline, but his own marketing savvy is, well, amazing. Three months after opening, this was the base of Barcelona Football Club for their May 2011 UEFA final, which they won. He knew it would bring good luck.