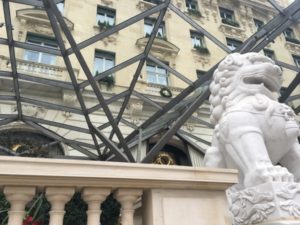 One of two lion guarding the avenue Kléber entrance

Oh what a glorious ceiling – above. It is in the main salon of The Peninsula Paris, a 1908 building that during the intervening years has been variously the Majestic Hotel and the headquarters of the Ministry of Foreign Affairs’ Centre International de Conferences. Today, you can enter this luxury hotel, opened as the 200-room Peninsula in August 2014, via Paris’ only proper porte cochère, on rue Jean Girardoux, or pass between the feng shui lions guarding the entrance to the avenue Kléber terrace, and thus into the salon. This is what the gal did. 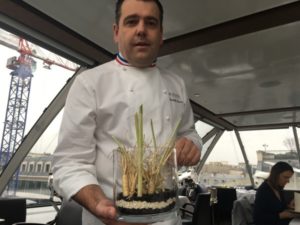 Chef shows off his fresh ginseng

And then I headed straight up to the sixth floor rooftop, to L’Oiseau Blanc, named for the bi- plane in which WWI aces François Coli and Charles Nungesser disappeared while attempting, on May 9, 1927, to fly the Atlantic before Lindbergh.  Looking across in the courtyard’s void I see a full-size replica of the plane, specially made by Gateguards in UK. Chef Christophe Roux comes over with a pot of living ginseng, but we (GM Katja Henke and I) decide on simplicity, and anyway M. Roux will have plenty of elaborate dishes to prepare over the next 24 hours. 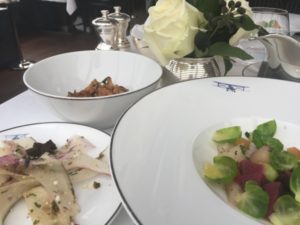 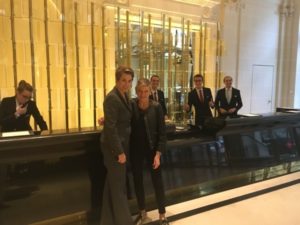 After eight years in Asia, Katja Henke is thrilled to be back in Europe – and at this luxury hotel (‘I can walk to work’, she says with a characteristic smile). She had lots of events to host back at The Peninsula Bangkok, but I bet she never had as many different noble families as she will be looking after tomorrow night. The Peninsula Paris is evidently the current choice for top social happenings.