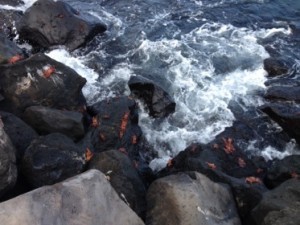 San Cristobal, a 215 square mile Galapagos island, is the objective of day five, for the luxury floating hotel that is Silver Galapagos. Originally called Chatham Island, for William Pitt, first Earl of Chatham, this is the only island with permanent fresh water and, another trivia pointer, although there are no Starbuck’s in the whole of Ecuador, they do grow Starbucks Reserve ® coffee here.   We zodiac to Puerto Baquerizo Moreno, to be greeted by a host of crabs, and are bussed to the Galapaguera Cerro Colorado Tortoise Breeding Center, to see another variety of the species, with shells that look like flute-edged pie crusts. (For a female baby, keep the eggs at 29 degrees C, a degree more than for a male.) 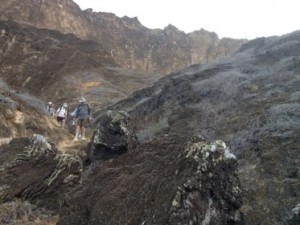 Today fresh food supplies had been brought onboard, from the big city of Puerto Baquerizo Moreno, population pop 6,672 – and a whole suckling pig, suitably dressed and presented, highlighted the always-popular Grill lunch. In the afternoon, it was stiff hike time, a really gruelling two and a half-hour perambulation over massive stone boulders that required ballet-type footwork and lots of luck. We saw tuff-cone landscape, water’s edge lava dust, the result of post-eruption magnetic gases and ground water streams. We learned about Portulaca Espanola, a ground cover whose leaves turn scarlet to prevent photosynthesis – that is until it rains, ever so slightly, when red turns to green and it is all go. 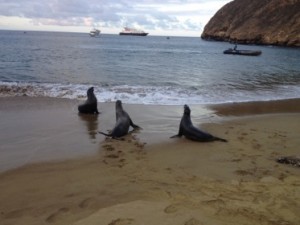 Having been welcomed ashore, this morning, by eight-legged creatures, we were seen off, this afternoon, by no-legs, in the form of four-fin sealions, with their fusiform bodies and external ears (which seals do not have). There are tens of thousands here, around the islands, thoroughly enjoying life, though it is reckoned that 50 percent of the then sealion population perished after the 1997-1998 El Niño, and the shortfall took a decade to recover. Most males live in bachelor colonies, with only one alpha male heading a wives-and-children colony at any one time. Their tenure can be as little as three weeks because of challenges by ambitious rivals. Females feed only one pup at a time but sometimes when her next comes along the elder sibling is, literally, loath to let go. 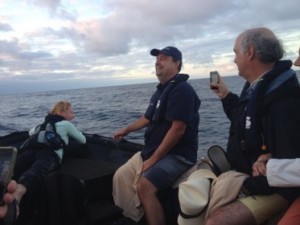 But the fun is not yet over.   A school of dolphins lies between the beach and the ship, and they are out to have fun. Four zodiacs play with the dolphins, or vice versa as the animals dive under and around; only the expedition photographer gets any worthwhile shots. Maria from Ukraine lies in the bow of our zodiac and gets totally soaked, and everyone laughs like billy-oh (is this the best house-party that any luxury hotel has produced, particularly since we then had a really expert, and generous, tutored tasting of onboard wines before proceeding to dinner?).