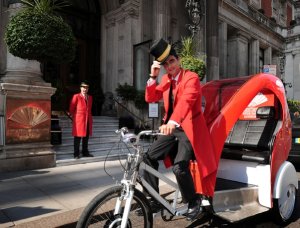 Getting around London can be a pain for a variety of reasons.  There are Boris bikes, the Barclays’ sponsored pay-as-you-go bikes copied from Montreal’s, but sometimes if you find a bike it can be hit or miss whether you find an empty slot into which to return it…

Coming soon, to big press acclaim (or so the gal believes) will be this scarlet bike rickshaw with a big logo for Mandarin Oriental London Hyde Park.  This canny luxury hotel is doing a deal with a supplier for the entire duration of the main Olympics, July 27th through to August 12th, 2012.   There will be two drivers taking it in turns to pedal, one man, one woman, both chosen for their personality as well as their biking. 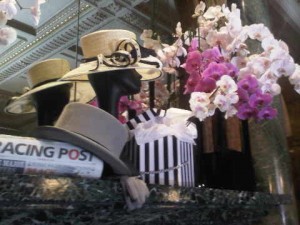 I like the idea of taking a picnic into Hyde Park, just behind the hotel.  This is actually two hotels in one, says my pal Sarah Cairns, who was Four Seasons for years before returning to the Mandarin Oriental fold – though she is such a brilliant networker that she has persuaded many of her Hollywood contacts from her time at Four Seasons Los Angeles Beverly Hills to stay here, when they are in London.

Why two hotels?  The front of what was formerly the Hyde Park Hotel was built 1890 as gentlemen’s chambers by architects Archer & Greene, is a townhouse hotel, right on Knightsbridge and directly across from the Harvey Nichols store. 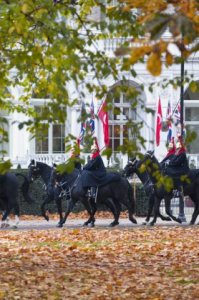 Mounted guards in Hyde Park's South Carriage Drive, at the north facet of the hotel

The rear of the hotel has a bijou garden that opens on to the South Carriage Drive near Hyde Park Corner.  Rooms facing that way therefore have the country view of the park.  Early in the morning mounted soldiers from nearby Knightsbridge barracks ride by for morning exercise and between 1030 and 1130 every day you see the Household Cavalry, in full regalia, on their way to and from their ceremonial duties outside Buckingham Palace.

The hotel might be a classic in exterior but by golly it has elements of 2012 inside.  The flowers are specially themed, as is shown by the racy hats for Royal Ascot in the lobby display of the last few days.

The hotel has two outstanding restaurants.  DINNER by Heston Blumenthal continues to get one award after another, for his imaginative recreation of old English dishes in a new way, served faultlessly in a room that Adam Tihany has designed with unusual features.

This restaurant, which also serves breakfast and lunch, does not have an outside entrance, incidentally.  The Lyonnaise who exported himself and his talents to the great USA, Daniel Boulud, has been given Bar Boulud, in the lowest part of the hotel, and yes, this does have its own outside entrance, down from Knightsbridge. 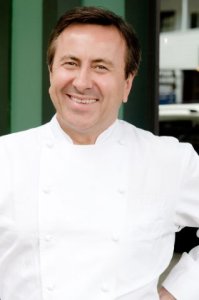 Bar Boulud is the epitome of a discerning neighbourhood restaurant, and from the gal’s experience is the Knightsbridge area’s best all-time bistro.  From late morning through to closing, it seems to be a non-stop gathering of the local (plus Belgravia, Chelsea and Mayfair) set and such occasional repeaters as arguably the world’s expert on neck, back and joints, Dr Ali – he of Castel Monastero near Siena, and saviour of Sylvester Stallone and Prince Charles and goodness only knows who else.  Others who love this place include Morgan Freeman and Denzel Washington (who raved about it in Hollywood Reporter). There are, judging by the carry-bags, shoppers galore.

I could not identify anyone when we lunched there on a quick rush through London but funnily enough many of the other customers looked familiar, like faces seen regularly in Vanity Fair rather than Hello!, and the Financial Times rather than the Sun, with just a hint of Figaro and the New York Times thrown in for good measure. This is fashionista-proper rather than Sidcup high street.

Not surprisingly, considering Boulud’s background, the lunch menu is Left Bank updated, with a hint of 1950s England.  There are prominent Fruits de Mer selections, with three sizes of shellfish platters, or oysters or Aïoli or prawn cocktail.

The last is pure English Home Counties, what the well- brought-up scoffed at dinner parties.  You can go for Soupe à l’Oignon, continuing the French theme, or head for an American chop-chop salad followed by a USDA sirloin.  Boulud is best known, however, for his burger.

His NY grilled beef burgers here run from a Yankee, with iceberg lettuce added, through to the BB, a composition that has had foie gras, red wine-braised short ribs, truffle and horseradish mayonnaise added.  Showing that fine dining need not be expensive, by the way – even in London – the BB is £19.50, which includes the UK’s VAT of 20 percent, but they do add a discretionary service charge of 12.5 percent. 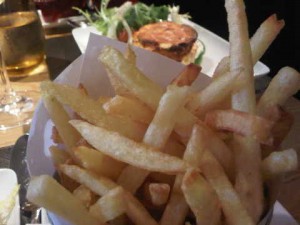 A French-themed Bar in London obviously produces must-have fries (there is a chèvre soufflé behind, also superb)

Anyway, some might just come here for desserts, say a peppermint coupe with sponge, hot chocolate sauce and mint-chocolate icecream, or for cheeses, or Gilles Verot charcuterie selection with pâtés, terrines, sliced meats and pickles.

There are also two types of hams warranting menu listings all on their own. Basquaise-style Jambon de Bayonne and Iberian-cured Jamon Ibéricos.  You can also choose specials.  Today the list included individual cheese soufflés which, with sides of spinach and French fries made a perfect mid-day snack.

With not only the Hong Kong-owned Harvey N opposite but the Qatari-owned Harrods a mere five minutes’ away, this is the ideal place to fuel yourself up for a serious afternoon shopping.  On the way out, pass a display of Margaux and other grands crus to entice  return.  Yes, a glass of wine next time, please.