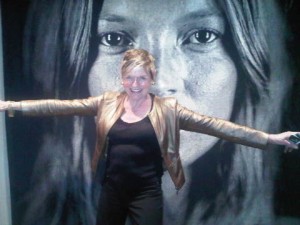 Even a full-bloodied filly of the calibre of Sophia Loren would surely love The Surrey Hotel & Spa, a hidden secret on New York’s Upper East Side (East 76th Street to be exact).  Why SL?  Well, it is she who apparently said ‘Everything you see I owe to spaghetti’, but more anon.

It is in fact Kate Moss, or a full-wall tapestry (Kate 2007)  of the supermodel by Chuck Close, who greets the gal in the hotel’s scrumptiously chic lobby, themed by designer Lauren Rottet for Coco Chanel.

This is all getting a bit of muddle with two many famous ladies all mixed up, like spaghetti in a twist.  But let’s follow Rottet’s theme.  Turn left from the lobby into Pleiades Bar, run by Daniel Boulud (who also, as his name suggests, runs Café Boulud, to the right of the lobby).

The bar is divine, a long low-ceiling affair, black, white, cream, with silver chandeliers and an front-open cabana, Chanel by a pool, so to speak.  The server, chic blonde hair, chic black dress, pearls and so on, almost kneels as she asks what you would like to drink. 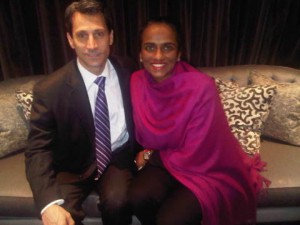 Joe Gaeta and Shan Kanagasingham, both staying still for a rare 30 seconds

make you a cocktail?  How do you FEEL today?  Do not know what he/she puts in it but it is, indeed, just how one feels.  Most of the others in the bar are local residents, super-affluent definitely – look at the hairdos and understated clothes. Bling not allowed here.

I am shown around by the vivacious Malay GM, Shan Kanagasingham (sent away by her parents to boarding school in Croydon when she was EIGHT!) and her colleague Joe Gaeta.

Up to the room, in one of two silver-grey elevators, to a silver-grey carpeted corridor. 1609, one of 189 rooms, is soft shades of teal, with a two-toned patterned carpet that somehow evokes leaves falling in the wind, perhaps in Central Park a couple of blocks away.

Both big windows, in salon and adjacent same-size bedroom, have full-width window seats printed with the words ‘Through these windows lies the soul of the city – across Madison and down 5th Avenue…’

What with a Nespresso cube espresso machine, Laguiole bottle opener, Sferra bedlinens and a Dux bed, a robe clearly marked ‘Hotel sweet hotel Pratesi’ (from the Pratesi shop next door) and exclusive toiletries by Italian genius Laura Tonatto, what more could a young lady want?  You can take a curated shopping trip along Madison Avenue. There is even room service by Daniel Boulud.

Anyway, the French have found this place, which is the only Relais & Châteaux hotel in New York.  We dine in Café Boulud, a packed-full restaurant, with sidewalk overflow, that is regular diner for the Upper East Siders.

We, three women, two of them single, talk everything from current American politics to, much more exciting, real life here. The Brazilians come, partly thanks to concierge Lorena Ringoot from Rio de Janeiro.

The Chinese and Japanese contingents are growing, thanks to Madison Avenue marketing associations in Beijing and Tokyo. Many local people move into The Surrey, say if their own pad is being done over or perhaps if they are leaving their other half.

One such near-live-in moves in to her hotel room four nights a week. The other three she spends in The Hamptons. Frankly it is amazing more people do not live in hotels in New York – especially if they are, like this, pet-friendly.  Trying to find somewhere to live, even shoebox-sized, is a nightmare, I hear.

You have to be first-to-spy-something, waking up at 0300 to check today’s web offers, and then get a broker, who charges 15 percent of your first year’s rent, a lot of which has to be paid up front.  Your shoebox home comes with landlord’s choice of utilities (gollee, in Europe we choose our own Bosch, or Miele or whatever). The washing machine is in the basement (how time-wasting).  The kitchen is an unnecessary clutter for some: one of my friends says she uses her microwave as a filing cabinet as she always eats out anyway.

The crisp white table has a single pale pink camellia in a glass. We share a bottle of J. K. Carriere Pinot noir Willamette Valley 2007, made by Northwest owner-winemaker Jim Prosser from seven different vineyards.

Sheryl Pearce, smiling and ready to perform facial miracles at seven (AM!)

There are also daily market specials, like Wellfleet oysters from Cape Cod, simply served on a round metal bowl filled with ice, and three side dips. And then, of course, one has to have with spaghetti. ‘House made, with Niçoise olives, tomato confit and shaved pecorino’ it is just that, no palaver, no extra cheese grated over with a flourish.  This is a delightfully unostentatious place.

And then, after a few, but high quality, hours getting to know the Dux bed, it is up with the lark, to the 24-hour gym and then, what bliss, a facial at 0700.  SEVEN O’CLOCK, exactly what a busy person needs, a once-over before putting on the cover-up, going out to face the day.

Sure enough, there is Sheryl Pearce from South Carolina, ready and waiting with all her Darphin supplies.  I awake, looking up to a gold-splattered ceiling, and feel ten years younger.  Even Sophia Loren would approve. 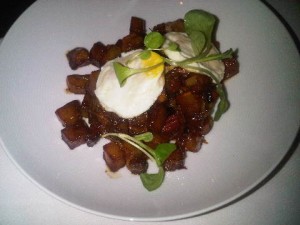 But what would she then think of corned beef hash for breakfast?  Bet Daniel Boulud does not have that on his other menus, say at the fabulous Bar Boulud in that other luxury hotel, Mandarin Oriental London. Anyway, it is all fuel before heading off to the local stores.

Having checked bespoke goods in the hotel lobby’s retro armoire, painted in 21st style by Jimmie Martin, someone would not mind a bit of jewelry from Tara Familglietti of Nana Fabella and perhaps a hat from milliner Emily Hagen of MLE HAGEN…