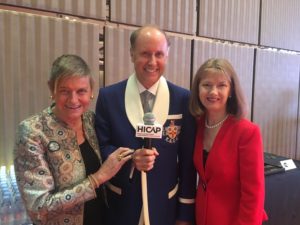 The annual Hotel Investment Conference Asia Pacific, HICAP, was started in Hong Kong 17 years ago by Jim Burba, Robert Hecker and Linda Stiles and although they have now sold it on, to Northstar Media (ultimately owned by the Wasserstein family) they remain, thankfully, the public faces of this crucial event. This year, over 850 top hoteliers, owners and suppliers flooded to InterContinental Hong Kong. As for the last two years, the gal was asked to do a today-live kind of thing, to get delegates away from networking outside and into the room. Co-host this year was debonair Duncan Palmer, who literally that day opened the booking engine of The Murray, a Niccolo Hotel, Hong Kong’s latest luxury hotel which he opens at the end of the year. 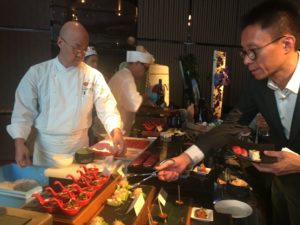 A station at the IHC party

The main themes of HICAP this year were disruption, and the growing empathy between sections of the industry. Disruptors are here to stay and are not necessarily the opposition. Work with them rather than against them was a constant message. Web in Travel founder Siew Hoon Yeoh brilliantly moderated a series of startups, including WeWork’s Turochas Fuad, who urged hoteliers to reach out to startups (for this entrepreneur, who started and sold on both Travelmob and Spacemob, COMO are his favourite off-duty hotels); plus Adam Brownstein, Booking.com (‘there is a shortage of hotel rooms’, he says), and such local information sites as GetYourGuide, started as a students-for-students service – it has since received $90 million funding. 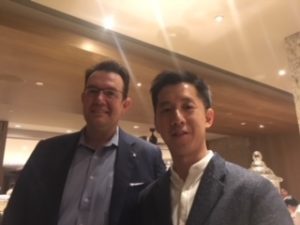 Of course there was outstanding hospitality during break-out times, and both evenings. InterContinental Hong Kong’s Nobu stand was the most popular at night one’s IHG-hosted cocktail. Night two’s buffet was hosted by Shangri-La’s new Kerry Hotel, Hong Kong, and the hotel’s enthusiastic GM Nick Smith had thoughtfully brought along the hotel’s designer, the talented André Fu, until now possibly best known in town for the avocado palette he put into the Upper House. (It has been revealed, by the way, that in 2018 and 2019 HICAP moves to The Kerry Hotel  as the InterContinental undergoes a complete facelift starting early 2019, operating as normal until then – next year’s HICAP is 17-19 October 2018, so mark the dates now.) 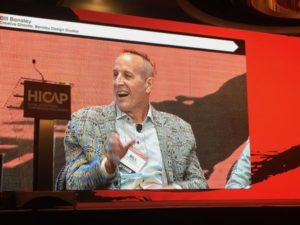 There were so many highlights during HICAP 2017. The image at the top shows Hyatt legend Larry Tchou receiving the 9th lifetime achievement award, presented by his mentee David Udell, now President Asia Pacific, Hyatt. Among the sessions, David Keen’s moderating of way-out creative thinkers of the calibre of Mark Hehir, from the Maldives’ The Small Maldives Island Company, and designer Bill Bensley, currently designing a jungle camp in Cambodia, was truly memorable. And then there was risk assessor Bob Broadfoot who said Asia now represents 33% of global GDP, and 39.4% of global exports, but 62.1% of its imports are regional – he also reminded everyone that a year ago he had confidently predicted a Clinton win. SEE A VIDEO OF BIG BAY CAFE AT KERRY HOTEL, HONG KONG, BELOW