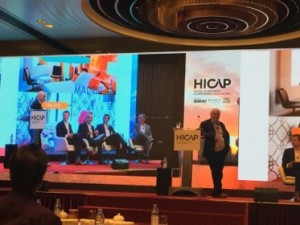 Panel in front of the splendid new LED backdrop

Here we are again – yes, it is that time of year, when all the great and good of the hotel world throughout Asia Pacific should be in Hong Kong for its annual Hotel Investment Conference Asia Pacific HICAP. Organised as always by BHN (Jim Burba‘s Burba Hotel Network), Horwath HTL (led by Robert Hecker) and Stiles Capital Events (CEO Linda Stiles), the 2015 event, October 14-16, 2015, attracted over 800 delegates. Over 90 percent were male, of whom 95 percent, higher than last year, thinks the gal, wore ties with their dark suits. And as always, HICAP was brilliantly hosted by one of Asia’s leading luxury hotels, InterContinental Hong Kong, which has added such innovations as a mammoth LED screen back of the ballroom’s stage.  Jean-Jacques Reibel, MD of this hotel, is like a conductor making sure that the orchestra of the hotel team enables HICAP to be better each year. 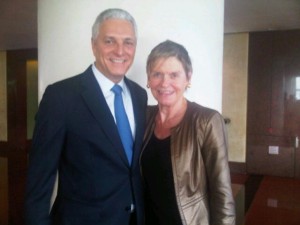 Jean-Jacques Reibel‘s boss is the head of IHG for Greater China, Kenneth Macpherson, who said that his area had an excellent 2014 and this year is looking good too. His investors are looking for developments that are more labour- and energy-efficient than in the past. HICAP is about hard work. Main sessions were extremely serious, looking at the effects of the Chinese slow-down, where to build and where not to build. Many owners and management companies want to be in Japan, especially Tokyo, but land prices are such that it is difficult to get entry (one Japanese speaker represents owners of hotels that have rooms that are, wait for it, just over 80 square feet, where if you want to shave you have to pull away the shower unit to make enough space – OK, that is not luxury, but HICAP is more about making money for investors than making space for luxury travellers). 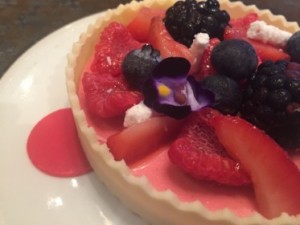 Jean-Jacques Reibel is constantly on hand throughout the three-day event. The first night the hotel throws the opening party, where drinks are lavishly free-flow with more than enough servers patrolling through the ballroom. This is where networking starts, to continue during break-out periods, and over meal times and, at all times, in the hotel’s brilliant second floor Club InterContinental. Another good meeting place was the stand-up, all-day deli, a pop-up facility so popular that it was crammed whenever I tried to get through, to the Club. The hotel’s Chef, Nicola Canuti, must have had his brigade working 24/7 as the food was so plentiful (loved the fresh-berry tartlets that finished one of the two lunches). 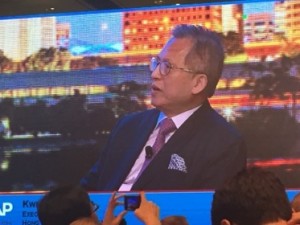 At the first lunch, a rare HICAP award, for lifetime achievement, was presented to Kwek Leng Beng, Chairman of CDL and Millennium & Copthorne. It was all rather appropriate, not only because he more than deserved it – his portfolio ranges from The Plaza New York, which he owned at one time, to Hard Day’s Night Hotel, the Beatles-themed property he recently bought in Liverpool. Kwek’s influential CEO for some years was another hotel legend, Richard Hartman, who had previously, as head of Asia Pacific for IHG, re-positioned what had been The Regent Hong Kong into what is now this luxury hotel, InterContinental Hong Kong. The hotel world, in case you did not know, dear reader, can seem incredibly small.