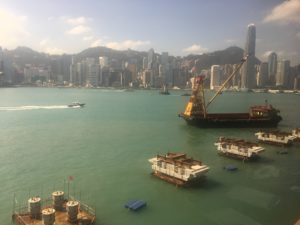 Fly into London and there is a blitz of enormous posters showing supposedly typical Brits, arms stretched open and saying welcome to London – of course there is a Beefeater but another poster shows the UK astronaut, Tim Peake. Arrive at one of Asia’s most versatile luxury hotels, Hong Kong InterContinental and there, says the gal, is Concierge Louis Baleros. Welcome to Hong Kong. (Why, you might ask, is this hotel so versatile? Well, it was once planned as a Peninsula, opened in 1977 as Regent, switched overnight to InterContinental on June 1st, 2001, and during its life it has continually switched from leisure to meetings mode, seamlessly.) 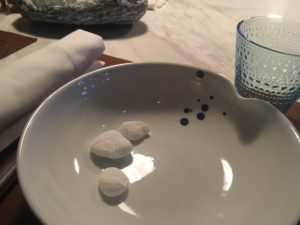 For the annual Hotel Investment Conference Asia Pacific, HICAP, it was in serious meetings mode but the 503-room hotel was ready. Every year teams among the 700 staff start, months ahead, planning and practising for the three days in October when nearly 900 hotel bosses, plus investors and consultants and suppliers, flood into town. Every year there are new enhancements: since the 2016 HICAP, the hotel has added a Rech by Alain Ducasse restaurant, a divine Scandinavian-look seafood restaurant cloned from the Paris original, which Ducasse now owns. As well as its all-wall windows looking over the harbour to Hong Kong Island, Rech is notable for its supply of Gillardeau and other oysters. I do like the simplicity of its table setting, too. 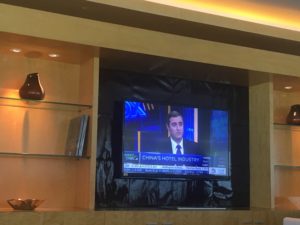 Every year, too, Ida Wong, one-time manager of the hotel’s superb Club InterContinental, meeting point during HICAP, comes back to help the team there. Coincidentally at one point when a considerable number of A-listers were in the lounge the CNBC screens showed Keith Barr, CEO of InterContinental’s parent IHG, explaining how many additional hotels he had signed that day (including the first EVEN and the first Kimptons in Asia Pacific). You could hear a pin drop as all eyes turned to the screen to watch and listen – he was actually only in Hong Kong for 24 hours as he had to get back to the UK for a board meeting but he still had time to sign hotels, work-out in the hotel’s 24/7 Technogym, and host the annual IHG Business Partners dinner. 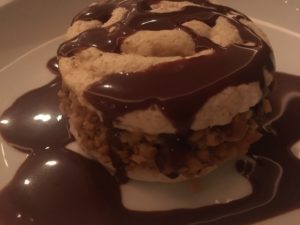 Imaginatively, the menu that evening did not start with the usual and, to me, increasingly unsatisfactory Champagne, which so often gets so warm, so quickly. Instead, they offered big tumblers, with straws, of gin and tonics, with plenty of ice. Equally creatively, the menu finished with Mr Rech, from that restaurant – it is a concoction of hazelnut icecream and meringue and a pouring sauce that everyone at our table used to individualise their dessert. The previous night, by the way, was my annual treat here at this luxury hotel, dining in the 30-years-young STEAKHOUSE grill+winebar. I love that place – see the second video, below. FIRST, MY LOVELY ROOM