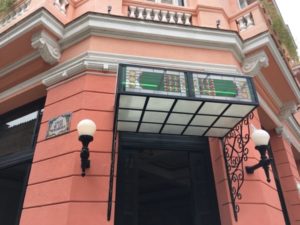 Ernest Hemingway, with his second wife Pauline Pfeiffer, first came to Cuba in 1928. They were in transit, awaiting another ship, and they spent their three nights in Havana at the Hotel Ambos Mundos, on Obispo, in La Habana Vieja. What is still rated a luxury hotel appears quaintly unique today, with its still-working open-sided elevator, taking some tourists up to room 511, his favourite when he returned on and off for many years after. But, says the gal, the absolute must for any interested visitor to Havana is to head out to his farm, Finca Vigia, look-out farm, 12 miles from the city. After Hemingway’s death in 1961, his widow, his fourth wife Mary, travelled back to Havana and, although she took away unfinished manuscripts, she gave the farm and most of its contents to Fidel Castro and the Cuban nation. 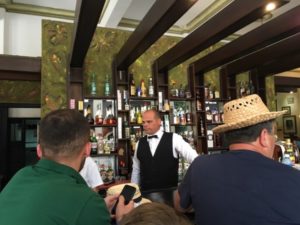 It was opened as a government museum on what would have been Hemingway’s 63rd birthday, July 21st, 1962. On April 29th, 2016, the US Congress was told how the National Trust for Historic Preservation recognises the entire Finca Vigia estate as the only US Historic Preservation site outside the USA. When visiting today, you cannot go inside his house but you peer through the windows and doors, at some of the 9,000- plus books on his shelves, apparently in over 30 languages. You see his study, where he wrote, mornings-long, standing up at his typewriter. The dining room, with a table for six, has a big Miró (now a copy) hanging over, and a Picasso ceramic on the end wall. The guest bedroom has the shortest beds for adults ever seen, but, judging by the number of empty liquor bottles displayed elsewhere in the house, perhaps sleeping was not number one priority here. 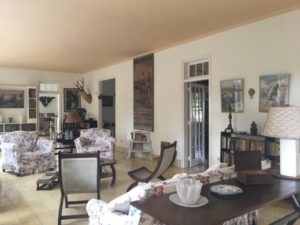 One tip: when visiting Finca Vigia: do try to get the deputy director of the museum, Isabel Ferrero, as your guide. A fluent English speaker and life-long student of Hemingway, she has access to all the private papers. Only she and Valerie Hemingway, the writer’s protegée and secretary, Valerie Danby-Smith, who married his son, Gregory, after Hemingway’s death, know as much about the minutiae of his life, and since Valerie Hemingway is now in her late 70s, I suggest you stick with learning from Isabel Ferraro, who delivers her vast knowledge with such enthusiasm, as though she has all the time in the world and as if this is the first time she has ever given the talk. She takes you around the outside of the house, and through some of the 15 acres of garden. 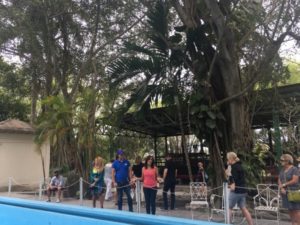 You hear about the 55 or so cats that Ernest Hemingway loved to have around him. You see the four gravestones for the family dogs. You see the swimming pool in which a guest, Ava Gardner, is supposed to have swum naked, and you see Hemingway’s beloved fishing boat, Pilar. After this, if you want more Hemingway, you can head back into Havana, for drinks at his favourite watering holes, La Bodequita del Medio, where he had his famous Hemingway Mojito (double the rum but hold the sugar), and, next to the gorgeous luxury Gran Hotel Mazana Kempinski La Habana, the bar La Floridita, where he tended to choose a daiquiri. Alternatively you could go back to his favourite hotel, Ambos Mundos, for a drink in the bar there. What a shame Hemingway never saw Gran Hotel Mazana Kempinski  because that, undoubtedly, would be his top for style, and authenticity.