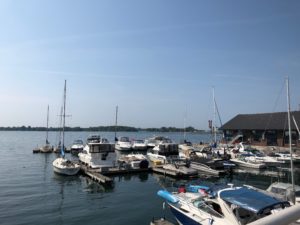 Few cities have so desirable a location, especially in summer, as Toronto. When the weather allows, Lake Ontario, which is a mere three blocks from the city’s main Union Station, becomes a pleasure playground of boats, big and small. From sunrise on, electric water taxis ply back and forth to Toronto Island, home of the City Airport, base of Porter Air. Toronto’s iconic luxury hotel, Fairmont Royal York, the grand old lady celebrating her 90th birthday next year, looks over Union Station, next door, and on down to the lake. The gal was so happy to be back, after a two-year absence. 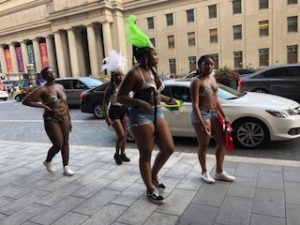 The hotel opened in 1929 and it has metamorphosed into a 1,348-room giant that is remarkably up to date – all the floral curtains and drapes of years past have fortunately gone, one hopes to a new home.  It is definitely the centre of activity, for locals and visitors from far and wide. Last weekend it was a main sponsor of Toronto’s annual Caribbean festival, attracting maximum numbers of attendees in, sometimes, the most minimal of costumes (if you can call two square inches of fabric, with dozens of sequins and perhaps elaborate feather headgear, a costume). A jolly time was being had by all. 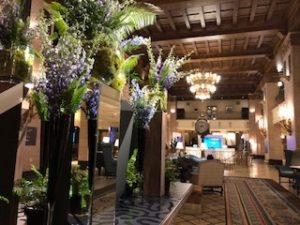 Looking along the lobby

The hotel’s stately lobby still includes the famous two floor-high, four-sided clock – meet me by it. A few feet away are signed portraits of The Queen and Prince Philip, who last checked out 2 October 2002. Here in the lobby, too, is an interactive display promoting Seeker, or SeekerProject.com, an initiative of Le Club AccorHotels, which now, from a couple of weeks back, also includes Fairmont’s loyalty programme.  This is a hotel with unique history that is very much up to date: the Technogym is 24/7, and its adjacent pool, with trompe l’oeil at the far end, opens at six. 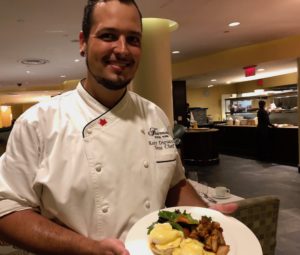 EPIC is an unusually successful all-day restaurant in that for Sunday breakfast runs from seven through to 2.30, and, says chef Kory Dipucchio, typically 500 guests or more are served.  Complementing the buffet are such à la carte dishes as the best-selling Eggs Benedict (see photo above), possibly named for former New York broker Lemuel Benedict who asked the Waldorf in 1894 to cure his hangover with buttered toast, poached eggs, crisp bacon and hollandaise – all hollandaise is made fresh daily, says Dipucchio, but then this is a luxury hotel where breakfast, with Noritake china, and Peugeot mills and fresh flowers, and crisp linens, on all its breakfast tables has one buffet table offering 12 different breads and bagels for the Wollmath roller toaster.  And the server knew, somehow, that I like my knife and fork the wrong way round.  That is one tiny pointer that helps to make this an eternally great unforgettable hotel. NOW SEE A VIDEO OF THE LOBBY