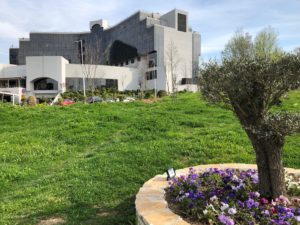 Well, the gal had absolutely no idea what to expect in Albania’s capital, Tirana – come to think of it, how many people have been there or even know anyone who has been there? Yes, there are tourists, many following in the footsteps of Lord Byron, who was so impressed by his visit in 1809 that his resulting poem Childe Harold’s Pilgrimage catapulted him to fame. And there are plenty of international business people coming to town, and Albanian diaspora coming back to see the family (they like showing their success, apparently – although the Bentley above, photographed on Bulevardi Zogu, is probably a Tirana success story). The mighty Kastati group, whose widespread portfolio includes hundreds of gas stations, recently bought the city’s most significant luxury hostelry, Sheraton Tirana Hotel & Towers: outside, today, is a pansy-framed olive tree, presented by the Embassy of Israel on January 27th, 2017. 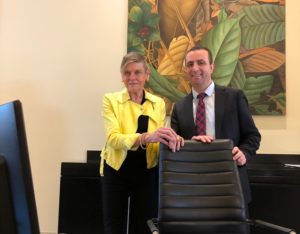 MAKtirana, as it is now, is run by kind GM Elsi Keko, who has been with the hotel since leaving school.  One of the outstanding features here, by the way, is his charming team. All 150 of them speak really good English and they genuinely want to help.  A maid came within ten minutes of my calling Guest Services to ask if someone could do my room, and when she arrived she seemed to know exactly how I wanted things put (room #634 is particularly nice as it has an extra alcove forming a semi-private bedroom area, as shown in the video below). The Club Lounge, by the way, is on the fifth floor. 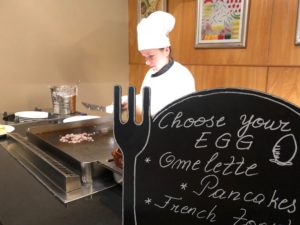 Another great plus for staying here is the fitness centre, with a spacious Technogym that is open 24/7, though if you work out before it is light, when you have views of the snow-capped mountains around, you only have Albanian television for company.  There is an indoor pool, and an outdoor pool as well, and for many months of the year you can indeed sit, if not swim, outside. I look forward, on my next visit, to dining out there as service comes from the adjacent indoor Infinity Bar, which seems to be one of the hotel’s two hubs.  The other must-do is the buffet breakfast in Metropolitan, the main restaurant. Try such local foods as pirozhki-like spinach-filled pastries, or get the egg chef to cook the dark-yolked eggs exactly as you want’em. 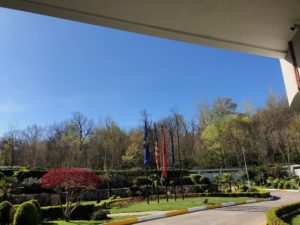 Looking out at the hotel’s arrival garden

With the exception of slight challenges when it comes to beef, Albanian produce appears to be first-class.  Think Mediterranean, only 40 miles from Tirana, and expect, correctly, to find fabulous fruits, and olives and olive oils, and such local wines as Kallmet, from a cherry-flavoured grape prevalent throughout the Balkans (the main Albanian vineyards are in the Berat area).  Yes, you will live well in Tirana, and you have the luxury, too, of real value-prices – even in the hotel, a big glass of wine is the equivalent of $2. And the air outside is clear, the streets meticulously clean, and you have a treat when it comes to Tirana’s old and new architecture… BUT, BEFORE WE TOUR THE CITY, SEE MY HOTEL ROOM