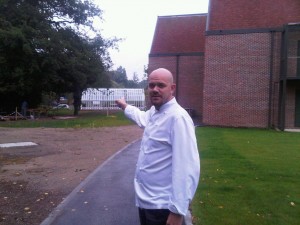 Lee Streeton, chef of London Syon Park – Waldorf Astoria, is any real girl’s favourite kind of chef.  He HATES hotel restaurants. He says Michelin is so last-century (he wants a full restaurant).  His main restaurant is Capability, named for Launcelot (Capabality) Brown, responsible for the incredible 400-acre grounds of the Duke of Northumberland’s Syon Park in which the hotel sits.

A word about the destination.  This is a hidden secret, tucked behind Isleworth and Brentford and yet only 20 minutes’ drive east from Heathrow, and little more to central London (which you can also reach by an above-ground train London Waterloo to Syon Lane and a 15-minute walk).

The Duke of Northumberland owns the land, which he leases to a Greek Cypriot entrepreneur, Andreas Panayiotou and his family, who own the Ability Group. This is the Group that built a three-floor brick hotel, with 137 bedrooms and a ballroom for 400, and since they also own several other Hiltons they decided to let Hilton put its Waldorf Astoria uber-luxury signpost here, the brand’s launch in Europe.

It was hotel GM Dale McPhee, the ultimate bubbly Canadian, who brought Lee Stratton in as executive chef.  Born in the south west of England, in Somerset, he had been cooking in central London, but he wanted to be able to get back to ‘the land’.  Landscape cooking is this guy’s mantra. 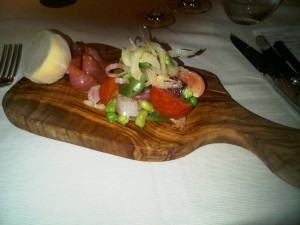 He called me at 7.10 am – yes, he was already in his kitchen – inviting me to see his garden, and his greenhouse.  This is a freestanding all-glass affair, about 30 x 10 metres and filled with plants, but fortunately there is just enough room for a massive butcher’s block that holds food to serve the ten lucky people who can dine there.

That is for my next visit.  This time I ate in Capability.  This is no cutprice theatre, by the way.  The pale apple and beige overall colouring is enhanced by beige table linens from Rivolta Carmignani (matching metal milk jugs hold seasonal garden flowers), and Wedgwood, mostly white but the showplates have brown outlines of two plane trees, nicknamed Duke and Duchess.

I had to try the Streeton-smoked salmon, and gardener Robert’s salad, with a variety of beans, served as a combi on an olive-wood platter (another platter held just-baked bread slices, with rounds of Northumberland churned butter). 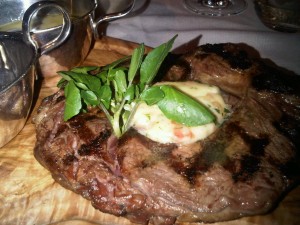 You can opt, after choosing your food, for wine pairings, two for starter courses, two for main course entrées and one for dessert, but we merely went for Château L’Eglise 2009 followed by herb teas, literally made from herbs immediately outside the restaurant’s windows.

Dale McPhee says many choose to marry here, in the hotel (or in Syon Park’s 18th century all-glass conservatories, and then walk five minutes across to the hotel for the reception).  Others attracted here include families, for the space and such Syon Park offerings as the Snakes & Ladders’ kids centre and an all-age garden centre.

I will also be attracted back by free bicycles to cycle along the Thames-side route to charming Old Isleworth and its pubs, and by the hotel’s Kallima Spa, with botox (great for today’s gals), and indoor pool. There is Boldt, the residents’ library packed with such books as Susie Green’s Dog Fashion, and free computers.

And, of course, there was my bedroom, 108, with its automatic grey suede curtains, black velvet buttoned bed headboard, finest linens, Asprey toiletries and an illuminated toilet button that cleverly meant I could see my way in the dark. And downstairs in the lobby, I loved the space and all-glass walls, and armchairs with seven-foot high apple velvet backs, and a display cage with over 500 real live butterflies.  This is Alice in Wonderland, girls, but real.  www.londonsyonpark.com