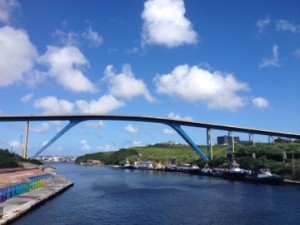 Willemstad, capital of Curaçao, has two spectacular bridges over the St Annabaai river – one is this magnificent Queen Juliana bridge, linking the Seru Otrobanda area of the city with Fleur de Marie. One of the visitors to town that day tried to walk over the bridge but was picked up by a patrol car and brought down to earth. The gal was on one of her favourite luxury-hotels-at-sea, Silver Cloud, which had sailed in early one morning. Curaçao is one of the six former islands that made up the Netherlands Antilles, although in 2010 it became a new constituent country: it remains one of the former-Netherlands Antilles’ ABC, which also includes Aruba and Bonaire. The other former-Netherlands Antilles islands are Saba, where the film King Kong was shot in 1938, the beach-less volcanic Sint Eustatius, and the half-island of Sint Maarten. 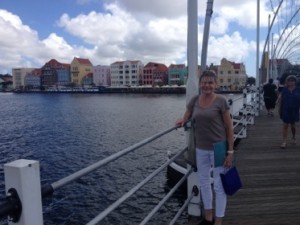 And its pontoon bridge (note the characteristic coloured houses)

Willemstad’s other bridge is the Queen Emma pontoon bridge, which had swung around to allow the ship to reach its mooring. The pontoon bridge is a main attraction, as are the gloriously-painted buildings either side. There are also 25 churches, and the 1732-vintage Mikveh Israel-Emanuel Synagogue. This island, says Caribbean specialist writer Chris Rogers, is culturally the most interesting in the whole of the West Indies, but as too often happens in any cruise itinerary, we really did not have enough time there. For many on the Silver Cloud, Curaçao, which has over 20,000 visitors a year, was appealing for shopping, and its aquarium, and floating market. 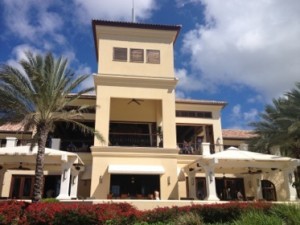 Looking up at the Santa Barbara’s main lobby

I headed up to Santa Barbara Beach and Golf Resort, a 350-room hotel that is part of a massive complex of marina and residences, rough terrain, quarry mountain and much more. The hotel had opened January 2010 as Hyatt, but on December 15th, 2012, it was famously taken back by its owners, the Smeets Family Trust, to run as an independent – it is managed by Benchmark. Under GM Troy Mathews it is doing a skilful marketing job. Every single room was occupied at my visit but the room I was able to see was spacious and cool, with lovely local Curaloe toiletries – you do pay for WiFi but it is free in the lobby, which was littered with hotel guests working devices of every conceivable size and complexity. 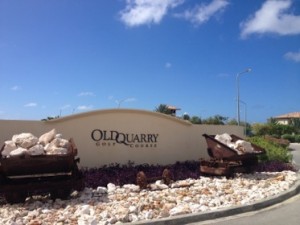 Entrance to the golf club

But in my short visit to this luxury hotel, sensibly a member of Preferred, I saw why people come back again and again. Kids love the beach and pool. Older girls love Mommy & Me facials. Parents are drawn by the Old Quarry Golf Course, par-72, total 7,200 yards, designer Pete Dye. Even its entrance is perfect, a reminder that all the stone around has been quarried from the table-top mountain that is part of the Santa Barbara estate.