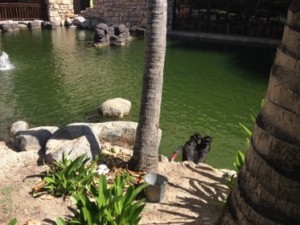 A black swan swims up to three newly-laid eggs

There was big excitement at Aruba Hyatt Regency Resort & Casino, the premier luxury hotel on the island’s westerly Palm Beach. The day the gal arrived for a visit, one of a pair of black swans that patrol the water-feature outside the main restaurant had laid three eggs. Let us hope at least one of the eggs hatches satisfactorily. This is an extremely successful hotel, packed out, with rates more than trebled over Christmas and New Year, when minimum stay is five nights (WiFi is free, by the way). Including many children, there must have been over a thousand staying at the 357-room hotel. 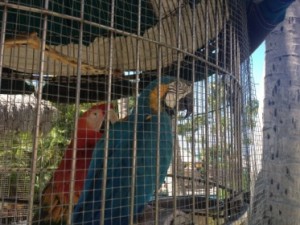 There is so much to do. Loved the Kadushi – ‘cactus’ juice and smoothie bar, where whatever you want is squeezed in front of you. My favourites were papaya in paradise, a smoothie of mango and papaya, and also a cool vibes concoction of celery, spinach, cucumber, lime and yoghurt. There are strict notices asking you not to feed the resident toucans, by the way (yes, I said there was a lot to do here, including a 24/7 Precor gym and tennis, and nearby golf, and just generally deciding which restaurant to frequent and if you cannot make up your mind, head for the Shoco to-go…). 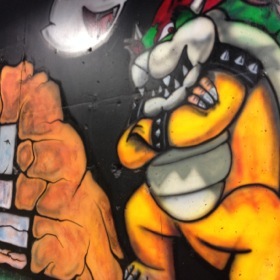 Seen on a kids’ club wall

I was impressed by the ZoiA spa, where the five treatment rooms have inner-lit circular basins that glow in the dark.

There is an indoor games room, with car-simulators and many other gadgets that youngsters enjoy when they are bored of the sun.

Camp Hyatt at Camp Watapana, promoted by a mythical pair, Johnny and Jenny Venture, is super, too, with an outdoor playground and, inside, walls covered with stylised maps, of Aruba and the USA.

Educational fun is so much more valuable than just messing around. 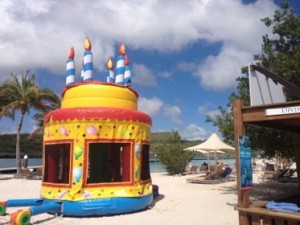 So parents pay for their kids, and they can pay themselves to have a beach palapa as shelter from the blazing sun – opt for renting ahead, or the less-expensive first-come-first-served, which presumably is the best option if and when this luxury hotel is running low occupancy, which means almost never, as 2014 closed at an average 87 percent, up seven points on 2013…