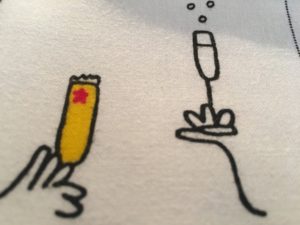 It is always a delight, says the gal, to return to Hotel de L’Europe, Amsterdam, the only hotel owned by the Heineken family, now led by Charlene de Carvalho-Heineken. Jeroen Henneman’s silhouette of her father, the late Fredy Heineken, greets you as you bound up five red velvet steps from Nieuwe Doelenstraat, and in through the door (what would Mr H think, one wonders, if he knew he is now looking down on a very successful macaroon display table?). This luxury hotel has few signs of Heineken, actually, though there are coasters and cocktail napkins, specially designed by Eva Gans. 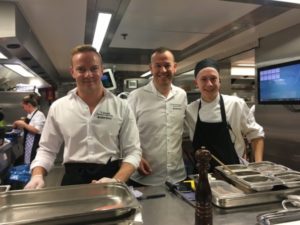 A cheery hello as I walk through the kitchen

I was taken through the immaculate kitchen of Bord’eau, the hotel’s two Michelin-starred restaurant, and the team, led by Richard van Oostenbrugge, smiled broadly. They know that many European gourmets make dinner reservations first and, once those are confirmed, they then reserve bedrooms to stay over rather than drive home. We were in fact lunching casually in Hoofstad Brasserie, which seemed to have many regulars, experienced lunch-goers who know a good deal when they see it. Many will certainly be here for New Year, says Tom Krooswijk, the highly capable boss of this 110-room hotel. 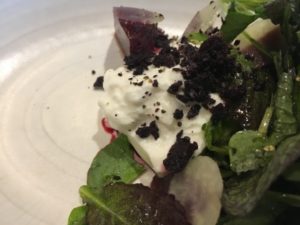 Beetroot and burrata salad in Hoofstad

This year the festivities are themed Great Gatsby, and he expects at least 300 revellers, though here perhaps that is a slightly over-the-top word. He does say, by the way, that Heineken is considered a fun drink by Americans, which is a draw. He also knows that he can regularly rely on Amsterdam’s many art exhibitions to attract the increasing numbers of art-loving high net worth travellers: coming up, for instance, is Hermitage Amsterdam’s Dutch Masters from The Hermitage: Treasures of the Tsars, 63 amazing works by 50 artists, including Bol, Hals and Rembrandt, on loan from the Hermitage, St Petersburg, and showing in Amsterdam October 7th, 2017, through to May 27th, 2018. 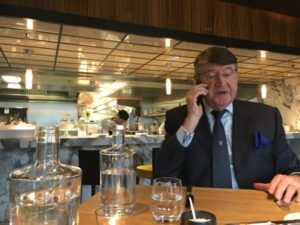 We were going to have look at the luxury hotel’s pop-up Mexican restaurant, which runs until Christmas, but somehow we ran out of time. There was, of course, by necessity just a minute to toast a couple of people in the farewell flutes of Champagne that seemed miraculously to appear, bubbles and all, from the front desk team. How appropriate, I thought: the Champagne was Billecart-Salmon, like this hotel, one of the few to remain family owned. Well done, Tom & Co, I still do not know any other hotels that always offer Champagne on departure.