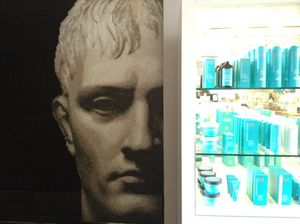 A Roman head next to spa products

There are heads not quite all over the place at Waldorf Astoria Chicago but at least in strategic places. Head for the fourth floor spa and you are greeted by an eight-foot tessellated Roman male, to your left, and his lady, to your right. What these supposed Romans would think of being adornments in the luxury hotel that has highest average rate in Chicago puzzles the gal. He, the guy (let us call him Claudius) is right next to a display of MoroccanOil products, which is not inappropriate, as classical historians know, as parts of Morocco were annexed to Rome in A.D.40. 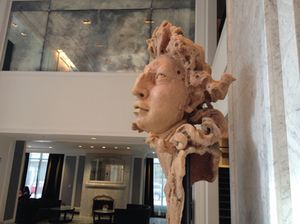 Two more heads are sculptures of Medusa, Mexican art works formed of brown sugar and seeds. Nearby is an embroidered picture of lifesize angels, with no heads. The designers of the whole 188-room hotel, which opened as The Elysian before switching to Waldorf Astoria in 2011, are a Chicago pair, Lisa Simeone and Gina Deary of Simeone Deary. The architect of the exterior, which looks persuasively Parisian, also lives here, Lucien Lagrange, but as his name and style imply, he is actually French. 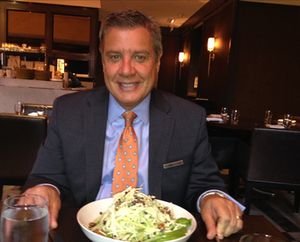 The boss of the hotel, Rick Evanich, is very much American, a one-time chef from Wisconsin, whom I have known from his Fairmont and Ritz-Carlton days. He is a people person. His 300 lovely team members, who are all tip-free, call him Rick. Yes, you read that right. This is a no-tipping hotel. The 20 percent of foreigners staying here love it, though some Americans must be a bit worried by not handing over greenbacks to all and sundry. Another unusual thing here is that some departments, like guest services and front desk and bellpeople, rotate. Show a new guest to a room one day, rotate the main revolving door the next. 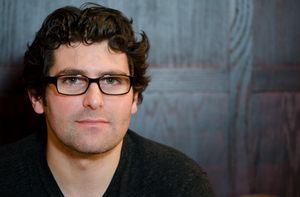 The restaurant, Balsan, does not rotate staff, so a bellman is not likely to be preparing your Waldorf salad (here made with julienne of Granny Smith apples, celery, caramelised walnuts and currants). Balsan is in the process of re-concepting, in partnership with ongoing culinarian, Brendan Sodikoff, Chicago’s wunderkind chef, whom some newspaper columnists liken to Liberace, though the jewellery, bouffant hairstyles and tight-tight satin suits that Michael Douglas so adored wearing in Behind The Candelabra are fortunately missing.   Brendan Sodikoff has restaurants in the Chicago area and he is also consultant to Soho House, including its clubs in London. 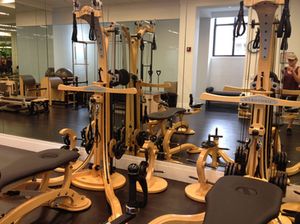 Corner of the wellness (?) facility

But this luxury hotel, I must add, is not only about heads. It is also about bodies. I think I have seen most bits of apparatus in wellness centres but this adds something new. There is a very efficient, very clean Matrix gym, open from 5.30 am, and there is a lap pool long enough for serious swims, as long as you are by yourself. Add the standard Pilates frames and supposed instruments of torture, and then add these. I must come back, to have a lesson!