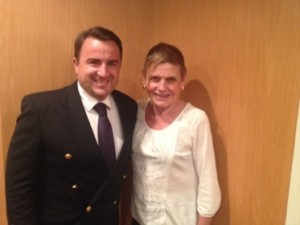 A luxury hotel at sea is, for some, a private yacht – the gal is looking forward to hearing more about Solandge, designed by Espen Oeino, which sounds like the ideal 85-metre beauty. For others it is luxuriating in your suite, with private veranda, on a cruise ship that has mega-facilities (but if you want water chutes and professional Broadway shows and golf putting ranges, you need to be on one of those monstrosities of the seas with thousands of other happy cruisers). Hopefully without running into the boredom zone through continual repetition, Silversea’s ships are a perfect size, plenty of onboard facilities and not too many other travellers – who are anyway more likely to be interesting, as are the officers. On Silver Cloud on this Caribbean cruise, our hotel manager was the charming Marius Octavian Sima, who was sometimes the only other person running the deck before sunrise. 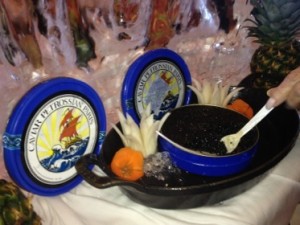 Petrossian at a special lunch buffet

Silversea is all-inclusive, which means as long as you stick with what is on the main ‘menu’ there is nothing to pay. Champagne? As much Heidsieck as you like, or Pommery if you ask for it, but if you want Dom Pérignon there is a charge. Want caviar? There is a Petrossian menu in your cabin – sorry, ‘suite’ – if you want to gorge on the Beluga but, guess what, on this voyage, on a very special day, there were unlimited kilo tins of the black jewels, carefully ladled out by one of the buffet servers. Of course you pay for spa treatments, and because it is satellited you pay for WiFi, which is, to say the least, slow.

But life is getting better. Instead of paying by the minute and biting your nails while the seconds and minutes pass and you still may not access that vital email, now you can buy a cruise-long deal, $224 for 14 days and stay on if you wish 24/7 during that time. That meant I could read my satellited Financial Times printout – oh what a treat – and finish half the world’s news, no nail biting, and then that email would pop up. But what also makes Silversea even better is that the butlers have found their role, do it superbly without flourish but with maximum thoughtfulness. It was so nice to find my shoes taken away for polishing before each formal night. 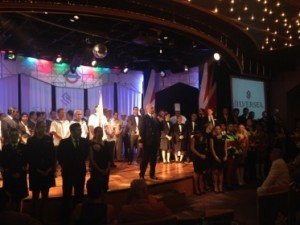 My butler, Rachelle from the Phlippines, was so divine Iwanted to wrap her up and take her home. At the Captain’s farewell, always on the penultimate night before disembarking, there is a tribute to the whole crew, and I have never seen such enthusiastic applause from the passengers, and it was genuine. Led by Captain Marco Sangiacomo and with the help of the ever-smiling Marius, and Rachelle and her business partner, my cabin steward Alvin Padolina, and with so many others, this truly was a luxury hotel experience, on the move…