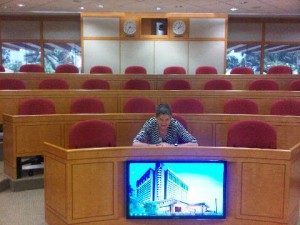 The gal arrived in Mumbai to try out, as it were, the new Harvard Classroom.  Yes, this very week Harvard University launches its futuristic, serious study Mumbai (Bombay) offshoot.

Ten times a year, 82 lucky, and intelligent, students will spend a week sitting in this amazing meeting room at Taj Lands End, a Leading Hotel for a variety of reasons.

The Classroom is U-shaped, with tiered seating. It has an excellent reception area outside and, three minutes’ indoor walk away, a dedicated dining room overlooking the hotel’s pool.

When Harvard is not in session, by the way, the ‘Harvard’ is removed from signage and the area becomes The Classroom. This will undoubtedly be a venue for regional, if not international, movers and shakers.

Taj Lands End has the big advantage of being only 20 minutes’ from the airport, and it is at the north end of the 3.5-mile Bandra-Worli Sea Link road bridge, which finally opened in 2009 at a cost of $350 million.  Anything that cuts even a minute off driving in Mumbai is worth its weight in gold, by the way.

At my first visit to Taj Lands End (which switched from Regent in 2002), you could not see the ocean, the Arabian Sea, across Byaramji Jerjeebhoy Road  because of the tall wreck of the ruined Sea Rock hotel opposite.

This wreck was bought, like the Lands End hotel, by Taj’s parent, and razed. The view of the sea is now breathtaking and unobscured. Long may planning for any rebuild be delayed to keep this view as-is.

I had a day-room, 2301, with this spectacular view. Had I had time I could have lazed in a bathtub, looking ahead at the television at its foot, or looking right, through the glass wall into the bedroom and across it to – the ocean.

Driven off, by Jaguar, to Taj Mahal Palace

This is a business hotel that offers thoughtful luxury. Cleverly, the safe is by the desk, which is incredibly handy (why do hotels so often put safes in closets that are difficult to reach, anyway, and then they set them either at floor level, which is hard for those with convex tummies, or at six feet high, which is difficult for the petite…).

This is also a fit hotel.  The new gym has all-wall windows looking out at the ocean, or you can head outdoors, to the Bandra Fort public garden to your left or, to your right, along the coastal Byaramji Jerjeebhoy Road.  You might well be striding along with some of Bollywood’s greats.   This is the area of residential discretion where some of the biggest names on the screen live.

Chinese fare did not seem right for a Saturday lunch so we buffeted it at Vista, together with about 150 Victorians (the Australian version, not hangovers from a century ago).

They were in town on business, and were having a day off. Some were in the gym. Others were lapping up the healthy buffet fare. The gal could have eaten bread and more bread, gosh it was good.  Individual pot-loaves. Tasted a bit like ciabatta.

And then it was time to be driven on, to the Taj Mahal, Mumbai of course, in a Jaguar of course (the Tata group owns Jaguar, and Land Rover, and Twinings tea and now, in India, 50 percent of Starbucks but apparently they will not be putting them into Taj hotels, only into their less-luxury hotels.

Even on a Saturday the traffic was bad but oh what a fabulous array of transport we passed on the way. There was the occasional truck and, down by the Gateway to India, there were more silver coaches than most people see in an entire lifetime.

Choose a black horse or a white horse, whichever. Just as outside The Plaza back in New York, the drivers of these vehicles are great salesmen, convincing you their carriage is best of the bunch.

What a way to arrive at the Taj Mahal Palace, Mumbai (another Leading Hotel of the World), with a welcome from a doorman who swore he knew me from my last visit eighteen months ago…