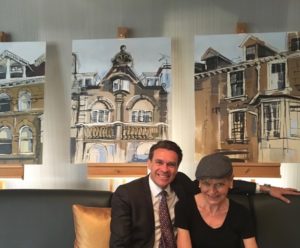 The gal decided to take a different look at the traditional luxury hotel scene and identify what specific niches of traveller want in today’s changing global world. The scenario is in Yorkshire, English home of the original popovers, batter puddings generally known as Yorkshire puddings, as served with roast beef, or, separately, with maple syrup or sausages. First stop is Harrogate, a town of 80,000 known for its spa waters, high in iron and sulphur and common salt. It is still a healthy destination. Stay in its premier convention and meetings hotel, Crowne Plaza Harrogate, and the lobby’s centrepiece, shown above, is a running table, with jogging maps, towels and water. You find good aerobic slopes even on the nearby roads, by the way – to give an idea of this beautiful town, the lobby also has stylised likenesses of some of its houses, as shown on left. 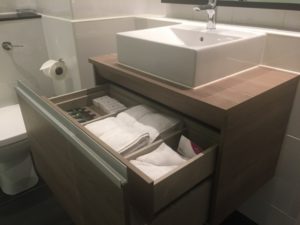 Storage under the basin

Belgium-born Nicolas Craninx, who has been GM here for the last four years, has had the fascinating task of evolving this 214-room hotel, which is 1982 vintage, from a rather-tired Holiday Inn to a practical and highly effective Crowne Plaza. It never closed during the nine month upgrade, which finished this March. Bedrooms had air-conditioning added, all rooms were given minibars and safes, and bath-tubs were replaced by big walk-in showers. Bathroom size could not be extended, so, cleverly, drawers-within-drawers underneath sinks hold towels, and toiletries, which are paper-held BeeKind by Gilchrist & Soames. I liked having binoculars, and two aromatherapy sleep phials from This Works, via Pacific Direct. What do business people need? Tea and coffee sachets are provided, giving a sense of locale – teas are from local company Taylors, and they come with Grandma Wild’s chocolate chip biscuits. 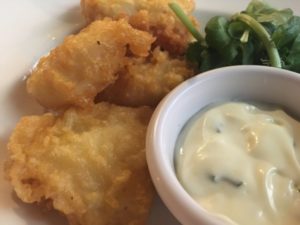 The hotel built as an adjoint to the massive Harrogate Convention Centre, third biggest in England, was put up in time for the 1982 Eurovision Song Contest, hosted here in Harrogate as UK had won the 1981 contest, in Dublin. (Interestingly, the 1981 winning group, Buck’s Fizz, was formed specifically for the Contest – see a video of Jay Ashton, Cheryl Baker, Bobby G and Mike Nolan performing “Making Your Mind Up”, by John Danter and Andy Hill, in Dublin, below.) The Convention Centre continues to host major events: just finished is Home & Gifts, coming up are the Harrogate Bridal Show, Northern Homebuilding & Renovating, Harrogate Christmas & Gift (singular) and Harrogate Nursery Fair (babies not gardens). One-off evenings include Yorkshire-born soprano Lesley Garrett. 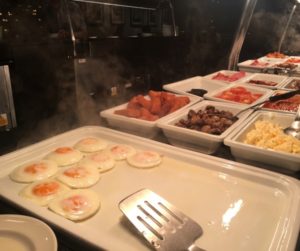 At any show time this hotel fills to capacity, with the ground floor Springs bar overflowing not only to its outside terrace but to the adjacent lobby, almost drowning the Run centre. One floor up, the very agreeable Springs restaurant similarly sees 100% take-up, as it does, anyway, most of the time. This is also a hotel that sensibly takes tour groups, say a busload of intrepid Taiwanese doing the UK and stopping here enroute from Edinburgh to London. Springs can do buffet or à la carte, and it has clever pricing (two meals for £39.99, with, each person, a 175ml glass of your chosen good wine and two courses, is really good value – I adored my tempura cod cheeks followed by superfood salad, with Merlot). The buffet breakfast, by the way, is sensational, with really tasty sausages, at least 70% meat as per Crowne Plaza standards, and bacon with lots of taste. For convention-goers and tourists wanting a taste of England, a breakfast like this is real luxury, as is any hotel that has lots of fresh orchids in its lobby, next to the Run station. NOW RE-WATCH THE 1981 EUROVISION SONG CONTEST WINNERS, BELOW