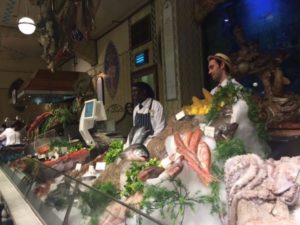 Harrods Food Hall is one of London’s sights…

It has been rumoured on and off for many years that Harrods would put its name on a luxury hotel but nothing has happened so far – at one point John Johnston, former President of Raffles, moved on to set up the new brand, but he moved on, again. To be honest, the Qatari owners of the brand-name ‘Harrods’ perhaps think that they will make more money, and a lot more money, by investing in the signature store. The gal nipped in for a fix of amazing overkill of stunning interior décor, goods to buy and people of all ages to do that buying. It only takes a couple of minutes to be somewhat repelled by the number of branded carry-bags that some customers are lugging out. It is much more satisfying to head straight for the Food Hall, and stay there. 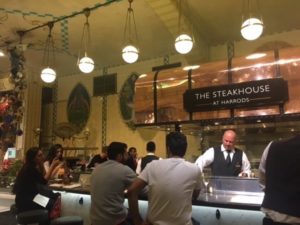 .. and it has restaurant counters

The chocolate counters, the fruit section, everything is perfect. The fish counter is an expanded version of my own pop-up fish truck near my home, where Innis, in full-body orange waterproofs, always has a splendid display of different fish, but Harrods has even wider a range. I was fascinated, too, to see that there are food counters here, offering Japanese, Chinese, a fish and chips bar, and, as shown here, a small steakhouse. The detail everywhere is so exact I wondered what would happen if Harrods did decide, after all, to go for its own hotel: the brand is already put on Harrods Aviation and Air Harrods, Harrods Bank and Harrods Estates, and Harrods Buenos Aires operated from 1922-2011 (what would Charles Harrod, who started a shop in 1824 at the age of 25, think of all this?). 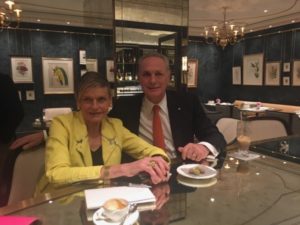 I continued on my way, to The Lanesbrough. After five years’ planning, the hotel finally has its own gorgeous Club, aimed at locals, though hotel guests can use it too. The Club is connected to the main hotel, and alike, in that the Club public rooms are Italianate extravaganza. Think brocades and lots of gold, and many paintings. Whereas the hotel, however, was designed by Alberto Pinto, the Club is by the London company 1508, led by CEO Stuart Horwood.   As the hotel’s MD Geoffrey Gelardi says, he has gone for the best, everywhere in the Club. The gym equipment is mostly Technogym but the main runners are Woodway, the best, he was told. 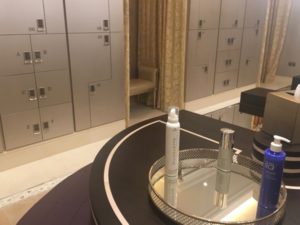 He has James Duigan and Bodyism doing personal training, and the five-room spa works with Ila and La Prairie. The locker rooms are Hollywood-like, with gold damask curtains around privacy changing areas. Members, and those lucky enough to be given, or buy, day passes have use of all the spa facilities, including the café, open from 7 a.m. Eat breakfast here and you can choose three types of granola, plain (with almond, hazelnut, grated coconut), green (pistachio, kale, pumpkin seeds) or red (goji, mixed berries), and much more. Any time, go for a protein brilliance Bodyism shake, or berry burn, apparently to encourage fat loss during a workout. But, and here is a good tip, the barista, shown at the top of the story, is Italian and he certainly makes one of the best espressos I have ever had in a luxury hotel. What is more, it comes with four tiny one-bit energy bites, just what I needed.