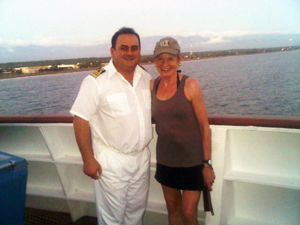 On the bridge pre-sunset, 31 December, with Captain Luigi Rutigliano

New Year really started for the gal on the bridge of Silver Cloud.  Captain Luigi Rutigliano had sent a message inviting us up to the bridge to watch the sail-out. A ten-year old German American boy pushed the ship’s siren, loud and clear.

Rutigliano beamed as he controlled the 16,800-tonne ship more or less with his little finger.  We eased out from the dock, and he gave the order hard a-starboard and the ship, all 514.14-feet of her, slowly swung around, through 180 degrees, to be able to sail ahead.

Next it was time for the show, in a tiered lounge that was so full we ended up back row of the C-shaped upper level.  It was a take on ABBA, stunning authentic gear, gold and white, and fortunately Jovani leapt up the stairs to where we were sitting (it was he who, six days ago, had paraded round the ship in full Father Christmas outfit).

Our dinner companions had occupied the ‘royal box’, at the end of one arm of that upper C.  Reminded me of hooker Vivian Ward (played by Julia Roberts) in the 1990 movie Pretty Woman, at her first visit to the opera, La Traviata in San Francisco. Vivian and corporate raider Edward Lewis (Richard Gere) had flown there by private jet, from one of the Los Angeles airports… and that brings memories of that fabulous luxury hotel, the Beverly Wilshire Four Seasons, where the Pretty Woman characters supposedly stayed, being looked after by mythical manager Barnard Thompson (played by Hector Elizondo).

And only ten days ago we were there, not staying but dining in Wolfgang Puck’s CUT restaurant at the hotel, and discussing the CUTs in Beverly Hills and London (at the Dorchester Collection’s 45 Park Lane) was first topic of conversation at the dinner table.

Since four of the guys at the table live for at least part of the year in London, restaurants in general are an emotive issue, but it was generally assessed that the anytime, anyhow universal favourite is actually Bar Boulud in Mandarin Oriental London Hyde Park. 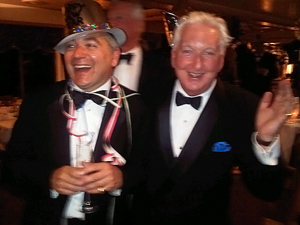 Tonight we had a choice of scarlet emperor fish, or duck, or beef.  The carnivores among us are morphing into beef-essentials, must have it, it is so good.  I heard about Michelangelo’s shopping list, illustrated with little cartoons of oranges, lemons and the like, but no cows.

Midnight came, and everyone kissed and hugged everyone as 700-plus black and silver balloons descended. Welcome 2012.