Happiness is making any gal’s busy life even more worthwhile, and looking back on some of those moments… there was a joint mani- and pedi-cure in Mauritius, with two professionals working simultaneously.  Time management. 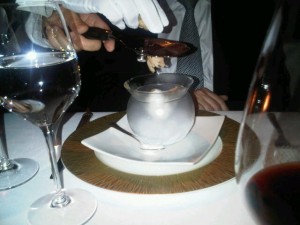 And how about arriving at Conrad Hong Kong just as the first white summer truffles arrived, and oh the taste of  Nicholini’s 48-month Parmesan sorbet, with truffles grated over…

And I arrived in Monte Carlo just in time for a glass of champagne at Monte-Carlo Beach Hotel. The lovely Danièle Garcelon was hosting cocktails in Elsa, named for that wit-of-a-girl, Elsa Maxwell. Snacks were the typical Monagesque canapé, Barbagiuan.

At the wedding of HSH Prince Albert and former South African swimmer Charlene Wittstock, the ultimate luxury chef Alain Ducasse – he who has more Michelin stars than anyone, ever – cooked for 500. 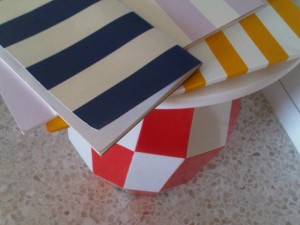 Danièle’s hotel, Monte-Carlo Beach Resort, is a riot of colour – see the striped collateral the girl placed on top of a bedside table, the whole designed by India Mahdavi.

It was colour the whole visit to Monaco.  The reds and greens of the four different tomatoes in the caprese that was brought by room service at Monte-Carlo Bay Hotel (it was up to the level of that other great caprese, at Castel Monastero). 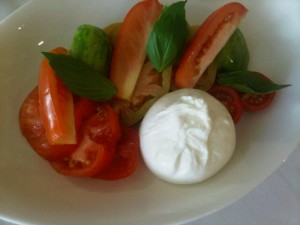 Monte-Carlo Bay Hotel is where the Ivory Coast’s best known footballer, Didier Tébily, said by Time Magazine 2010 to be one of the world’s 100 most influential people for his peace initiatives back home, married this June – he took over the whole 334-room hotel for five nights and even his Chelsea boss, Roman Abramovich, popped by.

Colour colour. Monte-Carlo Bay Hotel, thanks to Pierre-Yves Rochon (think Four Seasons George V in Paris, and, in London, both Four Seasons and also The Savoy, Fairmont), is a riot of hues. Its restaurant is Blue Bay, for the ocean and sky outside.  Its inside is, by contrast, orange and green. 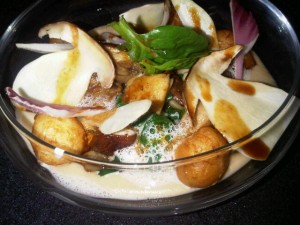 Want the menu?  Check the iPad for saliva-inducing images of hot foie gras and goodness knows what else, even a delectable glass bowl filed with cepes and crushed Caribbean goodies – the chef, Marcel Ravin, is from Martinique, and his food is never boring.

Time for the gal to share another Elsa Maxwell quote: A bore is a vacuum clean of society, sucking up everything and giving nothing.