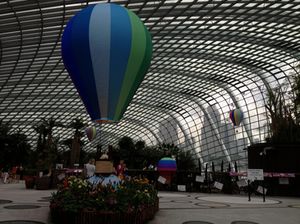 Inside the Flower Dome…

Singapore has a lot more than luxury hotels to offer – it has money and wealth (its government-managed funds rose 22 percent in the past year, said the Monetary Authority of Singapore, on July 23rd, 2013).  It is also trying to make itself more fun.  The gal was not, beforehand, enthusiastic about visiting the new Gardens by the Bay but, she has to admit, she was amazed.  First, the much-lauded 18 Supertrees, concrete and wire structures standing anything up to 155 ft high. 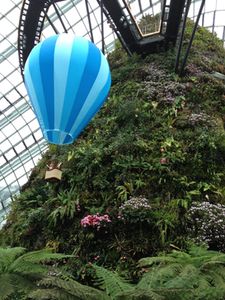 One has a restaurant at the top: others are joined by aerial walkways.  There are, by the way, nine restaurants in the whole complex, including Pollen, by Jason Atherton, sibling to the lovely Pollen Street Social in London, where I had lunch a couple of months ago.

The 250-acre project, on reclaimed land next to the Marina Reservoir, is the first of what will be three waterfront gardens, part of a S58 million project.  Grant Associates won an architectural competition for this garden, Bay South.  I took a tour around the outside Chinese, Colonial, Indian and Malay gardens, with suitable trees and plants and side-alleys that are purely educational.  And then I went into the two domes.  The Flower Dome, 110 feet tall, maintains a 23-25 degree temperature – its seven sections include Wollemi Pine in the Australian section, and proteas in the South African section, and so on. 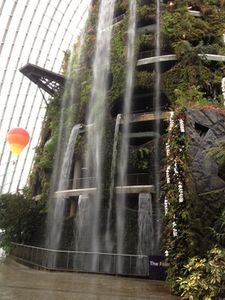 Gushing waterfall in the Cloud Forest

But I honestly think I preferred the other dome, the Cloud Forest.  Go in and you are confronted by a fake ‘mountain’, nearly 150 feet high.  A seriously-gushing 100-feet waterfall rains down on you and everything that could get wet – unless you are careful.  Take a lift up inside the ‘mountain’ and walk down, spiraling around, skirting that waterfall.  It is all very educational, and not surprisingly there are always lots of school groups going around (open just a year, there have been five million visitors in all, of whom 60 percent are Singapore based). Entry to the outside gardens is free: you pay to go into the domes. 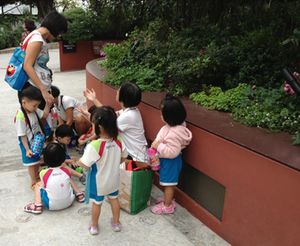 Amazingly only 50 gardeners look after the first third of the whole project.  Some of them must spend all day merely cutting lawns – one big stretch is known as The Meadow, an entertainment hill, where already Jennifer Lopez and Psy have performed.  These gardens, I am told, are designed for people who do not generally go to gardens.  Perhaps I fall into that category.  Anyway, I think there is something for everyone here, from pre-schooler to horticultural fanatic who wants to study, say, Keteleeria the Chinese evergreen tree that, unusually, can be coppiced, namely cut down to near ground level and, from the stump, new shoots soar. 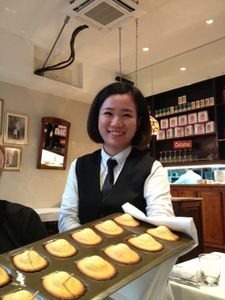 So, do not miss the Gardens.  Walk, as I did, from there across to Marina Bay Sands, for yet more shopping.  Perhaps, like me, you are heading for lunch, in which case go no further than Brasserie Gavroche on Tras Street.  Yes, it is a real ‘old fashioned brasserie’, run by Frédéric Colin, former chef of St Regis Singapore. After a tartine of beef marrow on toasted Poilâne bread, followed by French heirloom tomato salad with a side of frites, I was ready to call it a day – when a server came out with a tray of hot madeleines, straight from the oven.  Oh what style!  Memorable brasserie in Singapore, girl. 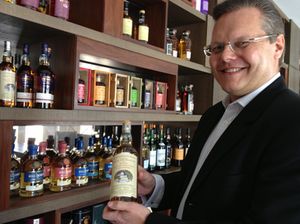 And for memorable drinking in Singapore, or rather on Sentosa island, head for the WOW bar, in the Mövenpick Heritage, a clever luxury hotel adaptation of a 1940s military building.  WOW here stands for World Of Whiskies, and the stock comes from Claudio Berlusconi, who has 3,500 different whisky labels in his own little place, Waldhaus am See in St Moritz.  Here there are ‘only’ 300 labels, including a Macallan 1946, at a mere S$30,000 a bottle.   I am told that whisky and food pairings are becoming very popular with trend-setting Singapore ladies (there is a 12-seat private room at WOW, and also a public table formed of a single trunk of Indonesia wood, big enough to get 14 sitting around). Well, one learns something every day…