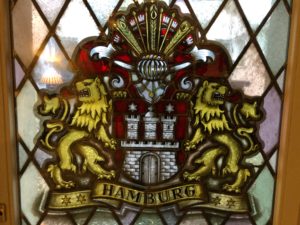 After visiting more and more luxury hotels which have stupendous lobbies, gorgeous bathrooms and elegant bedrooms, and yes, they do ‘f&b’ too, the gal was thrilled to be returning to Fairmont Hotel Vier Jahreszeiten, Hamburg’s historic venue that offers superb eating and drinking as well as superb bedrooms.  It has been here since 1897 (the stained glass city plaques up the main staircase walls are originals). Ingo Peters, above, in front of an ancient tapestry, returned here as GM a century later – he had started, as a page boy, in 1980. He has made it very much Herr Peters’ Place, thanks to the owners, Dohle Handelsgruppe, who bought in 2013 and said ‘make it even more luxurious’. 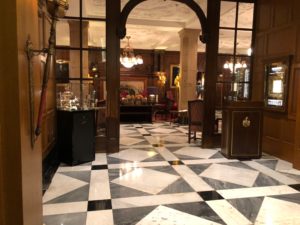 One o the many lobby views

The extensive lobby, with parading and several seating areas, is overtly theatrical, and highlighted by a grand piano and masses of flowers. There are white orchid plants, on upper corridors, and also in the fifth floor gym, which actually is more like a SoHo loft. It has sailors’ trunks as reminders of Hamburg’s maritime connections, latest Technogym bits, a brick-walled relax area with soft tan leather sofas that invite you to flop, and a pale pistachio Smeg filled with bottles of water.  This whole facility smacks of Ingo Peters’ creativity – it also suggests, correctly, that he is himself a runner. There are no outside members, and he says the gym does actually help fill the 157 bedrooms as active travellers, especially younger techies and finance guys and girls, move from other hotels so they can work out here. 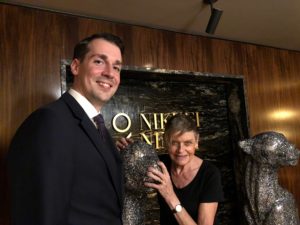 But the GM’s influence is everywhere. I only had one main meal here and rather than go Michelin at Haerlin, named for the hotel’s founder back in 1897, or The Grill, for ‘see and be seen’, it was to be Nikkei 9, to join Hamburg’s trendy 20-70 year olds. Yes, Ingo Peters designed it, with his wife Christiane, doing mockups in a bedroom. I never thought this was a windowless basement. There are so many mirrors, and ceiling mobiles, and lifesize black crystal panther sculptures from a Paris flea market – and, ladies, do not miss the washrooms, where stalls’ floors are underlit frosted glass looking like fishponds, complete with fish.  I was shown all round, before dining, by my date, Max Westphal, who after a career that already includes Gleneagles, winning a Savoy Foundation scholarship and InterContinental Berlin, has landed as the ‘food and drink’ man here. 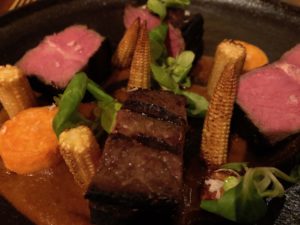 Who better as a guide to dinner at Nikkei 9?  We, like nearly everyone in the 66-seat restaurant, full as always, could see the lively and brightly-lit open kitchen (fortunately there was no Ginza-style chorus of greeting, as at that other Peruvian-Japanese brand, Nobu).  Dennis – yes to beard, no to tie, no to visible tattoos, though they are allowed – walked us through the gold-covered menu, with eight sections of food, and descriptions thereof.  I started with Nikkei cevichie, with aji amarillo (chili spice), cilantro and tobiko (flying fish roe) and went on to braised miso short rib with mole (South American sauce with chocolate, corn and sweet potato) we both tried mixed sashimi and sushi from Nikkei 9’s Osaka sushi master. Next, I climbed the 77 stairs, past the stained glass plaques, up to gorgeous, soft and empathetic, 200, the River Suite – see a video below.  In the morning, when I pulled back the drapes with their double-knot marine-style ties, the Jet d’Eau was already gushing, an eight was already rowing past. And despite my early start, I was not first to Café Condi – what a luxury it is to have a dedicated breakfast room, Max Westphal has said. This breakfast is true luxury, a perfect ambience, crispest starched linens, a buffet that includes nine different cold cut meats and yummy avocado cream, and breads for which Germany is justly renowned.  And I do like the kitchen server, coming out to refresh the buffet, wearing complete Bragard-style whites topped by a tall, but floppy, white toque.  But there are endless things to love here.  The Dohle Handelsgruppe, best known for HIT supermarkets, must be incredibly pleased, and proud of this, their only hotel. NOW SEE SUITE 343, AND THE GYM