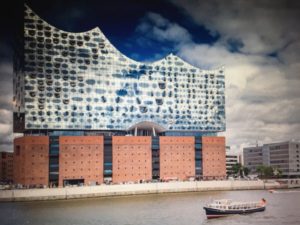 The concert hall, by Herzog & de Meuron (with sound by Japan’s Nagata Acoustics), rises above a 1963 brick warehouse by architect Werner Kallmorgan.

Hotel Louis C. Jacob, which runs restaurant CARLS an der Elbphilharmonie, has special packages which include pre-concert dinners, concert tickets and, afterwards, cheese and wine as you sail back on the hotel’s own boat, as shown.