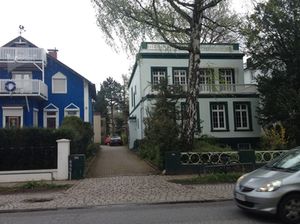 From the fabulous Louis C. Jacob luxury hotel to the west of Hamburg, high above the Elbe River, the gal took the 36 bus that runs every 15 minutes – on the prescribed dot – to the centre of town.  It is one of the most fascinating sociological rides and well worth the 25 minutes along the way (if the driver is ahead of schedule, he waits until his wristwatch silently says ‘go’).  First you go along Elbchaussee and its manicured homes of The Rich, if not the famous. Some are old, some new, some big, some small, but you can be sure that inside they are filled with treasures.   In Altona neighbourhood you pass the imposingly operatic city hall and soon after you have the flavour of graffiti, sex shops and casinos. 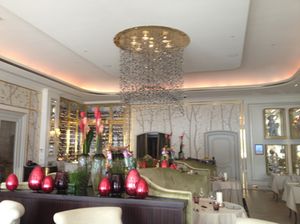 I alighted close to Fairmont Hotel Vier Jahreszeiten for lunch. First, Ingo Peters – a local boy who eschewed his family’s professions for the hotel world – showed off his gorgeous re-decorated two-star Haerlin Gourmet Restaurant, closed at lunchtime. Then we went to the historic Grill, where wiener schnitzel and other staples have remained best-sellers since the Grill opened, with the hotel, back in 1897. Then I went walkies, through the Europa Passage and its four floors, around a central atrium, of all types of shops (not as ultra-luxury as Almaty’s Esentai Mall, I am sorry to say, dear). 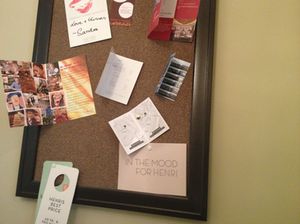 So clever – noticeaboard in a Henri’s toilet

Believe it or not, I was headed for C&A, and I found it, and its seven-floor block former management offices behind, in Bugenhagenstrasse.  In December 2012 these offices, originally built in the 1930s but rebuilt after WWII in the 1950s, were transformed into Henri’s, named for the last of the Jacob family, Henri Jacob.  It has 65 bedrooms and boy are they fun.  The retro look of some areas has been kept, and landline telephones are old-fashioned Bakelite – but look what has been added.  Instead of boring old guide-to-services books, all information is stuck up on bulletin boards in bedroom toilet stalls.  Brilliant. 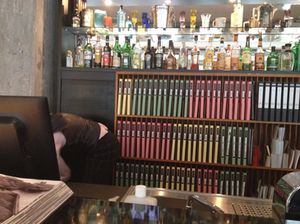 The hotel needs only 15 staff, in all. There is no ‘reception desk’ or ‘management office’. Everything is done from the bar, with all the files and records kept in colourful folders beneath a jolly good selection of drinks bottles.  There is no restaurant, but the bar extends to a lounge and on to a full residential-style kitchen, with plates stored in vertical racks above the sink (just as my gourmet sister stores hers, at home). There are chilled cabinets of foods ready to microwave, or cook more substantially, and prices are no-profit, so you sign for what you have taken rather than going to a nearby supermarket and bringing stuff in. 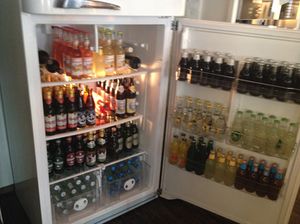 A fridge is crammed full of drinks …

There is a big fridge – Smeg, naturally – crammed full of drinks, with Ben & Jerry’s icecreams taking up all the frozen part.  This whole thing is so clever.  It is no wonder the hotel achieved just under 90 percent occupancy in its first year WITH NO ADVERTIZING, NO PUBLIC RELATIONS (PR companies, look for another job).  Jost Deitmar, – yes he of the suave Louis C. Jacob, who oversees sibling Henri’s – decided, with his onsite manager Eckart Buss, to put all marketing budget into the product and customers would find it, as they have done, in droves – the much-more-expensive Park Hyatt is just across the road. 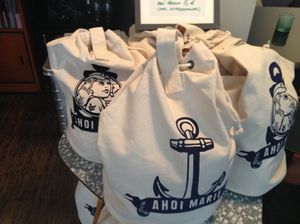 Stay at Henri’s and you could say it is a modern luxury hotel, and saves you money. Rooms have free WiFi, and espresso machines, and great beds. There is a nice little Technogym, 24/7, and a launderette, and a rooftop spa and sauna.  All these are free, but you pay €5 if you want a bathrobe and sauna towel, which you sign for down at the bar (they come in an anchor-embellished bag, so suitable for this nautical city).  Now, I wonder if Cliff Richard will be able to escape here, when he comes to perform in Hamburg May 12-14, 2014?  It seems like just his type of place.  Lots of entertainers visit Hamburg, often known as the Riviera of Scandinavia. The city also, summer long, has regular visits from big cruise ships, particularly those starting Baltic cruises from here, and July 18-20, 2014, sees the Queen Mary II here to celebrate her tenth birthday.