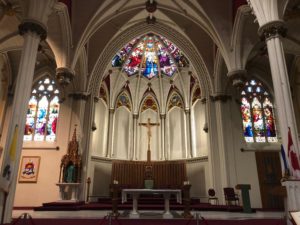 Looking into the Basilica

The luxury ship Seven Seas Navigator glided into the port of Halifax, Nova Scotia in mid-summer and it started raining.  It poured, and it poured.  The gal took the big golf umbrella supplied in every suite, and this, with two raincoats, one over the other, should have done the trick.  But actually who cared? St Mary’s Cathedral Basilica, a mile away from Seaport, where the ship was docked, was nice and warm. The Basilica is unprepossessing outside but from the inside its 21 stained glass windows are breathtaking. All were fashioned by the Munich company Mayer & Co, which has also serviced many Irish cathedrals, including Cobh, Derry and Waterford. 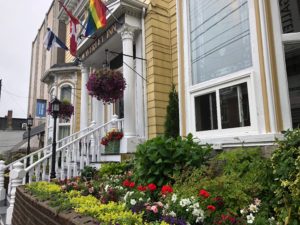 Here, each window is divided into two. The upper half of each shows a New Testament scene, with something from the Old Testament depicted below.  See, at the top of this story, the bottom of window 15. Here, from Jonah 2:11, Jonah emerges after three days in a fish belly, “And the Lord spoke to the fish and it vomited out Jonas up on the dry land”. This particular window was donated early 20th century by John and Mary Flemming after the rebuild of the Basilica following what is called ‘The Halifax Explosion’, when two ships carrying armaments for the war effort collided, and the resulting explosion killed over 2,000.  From the Basilica I walked west along Barrington Street, past the cemetery which includes the Welsford Parkes Monument, a mammoth memorial to two locals killed in the Crimean War, and past an elegant, if somewhat dour, Scottish-type mansion that is the official residence of the Lieutenant-Governor. 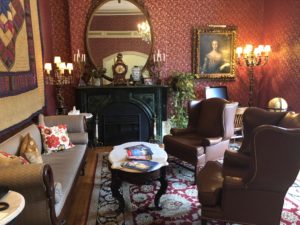 .. and its reception lounge

Still on Barrington, I came to the enticing entrance to the Waverly Inn, in a three-floor wood-clap building dating back to 1865. Its varied past includes hosting Oscar Wilde, touring North America to talk about The Decorative Arts and The House Beautiful – on the day of his visit here, October 10th, 1882, the Morning Herald said he was arrayed in velveteen. More regular guests included circus impresario P. T. Barnum, and apparently the Manager of the Bank of Nova Scotia, Thomas Fyshe, lived here for a time – he was the son-in-law of Anna Leonowens, of The King & I fame.   All 34 rooms here at the inn are unique and I was lucky enough to see the Thomas Fyshe room: it leads right off the charming reception area and its bed is so high that antique wood steps are provided. 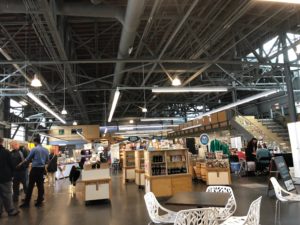 Waverley Inn could well claim to be the best and most memorable hotel in Halifax – and its room rates include breakfast, parking and WiFi.  I left it, turned south down Morris Street, along the one short block, between Hollis Street and Lower Water Street, past the few remaining 19th century heritage houses, all bearing certification plaques. By now the pouring rain had turned into monsoon, and my umbrella had turned completely inside out. I left it outside while going in to check on Seaport Farmers’ Market, a clever use of an old dock warehouse. There were cookie stands and Mary offered African cuisine while rosy-cheeked young bearded farmers displayed different kinds of apples.  Ninety minutes after leaving the Basilica I again climbed the stepped gangway to reboard Seven Seas Navigator.  Yes, home and dry and yes, I need a new umbrella, please.