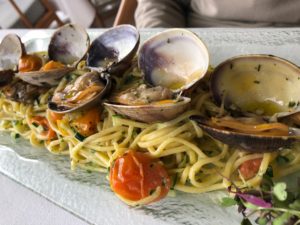 For decades, if not generations, Waikiki’s top luxury hotel, Halekulani (‘house befitting heaven’) has been a popular venue for weddings, as above, and honeymoons – Halekulani hosts about two full weddings a day but many others marry elsewhere, coming here just for the photos. Now the Mitsui Fudosan-owned resort is banking on many Japanese joining others who will flock to the next Halekulani, which opens on Okinawa in two years’ time. Expect such cloned features as a main pool with an outsize orchid on its base, and also be sure, says the gal, that service will again be up there at top-of-class level. And food will be just what you expect, with a twist – note the deconstructed linguine to the left. 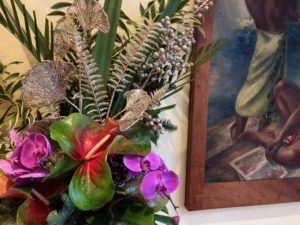 The original Halekulani was opened in 1907 by a merchant, Robert Lewers, who named it Hau Tree, and was renamed in 1917 by Clifford and Juliet Kimball, who added extensions (it is now a 455-room hotel, with two main wings). I was in 267, part of the massive Halekulani Suite, at the far end of Ewa Wing, only 20 yards from the ocean and with fabulous horizon views – apparently any resort here that is not actually on the water loses about 30% of its average daily rate. And yes, big names are moving into Waikiki fast. Since I was last here Ritz-Carlton and Trump have arrived: interestingly the President of the USA stayed, ostensibly for security reasons, at the former when he flew through on his recent Asia trip.  Of course if he were smart he would have taken the ultra-secure Halekulani Suite, reached by two elevators, one private. And he would, of course, have had an age-defying facial at SpaHalekulani. 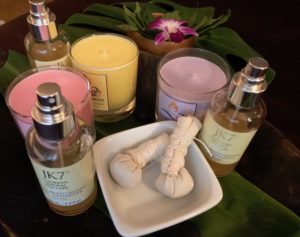 I was thrilled to be introduced, by hotel therapist Janine Marzouki, to SpaHalekulani’s JK7 Skincare.   JKskincare is the latest brainchild of a German called Jurgen Klein who founded LIVOS poison-free paints, moved on to work for Dr Hauschka and then founded Jurlique. Having sold this on, and relocated to Hawaii’s Oahu island, he reverted to plant knowledge he had learned, as a boy, from grandfather. JK7 stimulates all seven, sic, senses, sight, sound, touch, smell, taste, plus equilibrium and synergy. I had a 90-minute Euphoria Facial which uses 20 different JK7 products, and, as Robb Report testified, the idea was to attain ultimate balance, and stress reduction – next visit, I might go on to visit Dr Klein’s stress clinic at Sullivan Estate & Retreat, near his home. 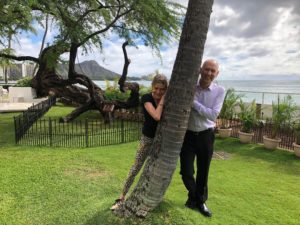 Mind you this gorgeous luxury resort is minimal stress, throughout. Take a tour, below, of one of its main courtyards. There is a first-class own-run boutique, with the kind of clothes you really want to buy (think The Peninsula Beverly Hills’ outstanding Marie-France van Damme store, but for global fashionistas in Hawaii). Experiences can include going to pre-dawn markets with the chefs, and introductions to paddle- or surf-boarding, and checking out local galleries and museums. Once back ‘home’, relax with a glass of the Halekulani Champagne, produced by Veuve Fourny & Fils in Vertus. Peter Shaindlin, who heads Halekulani hotels, is always looking ahead to what the top-end market wants next: as part of his research he is coming to the end of a post-grad diploma at Saïd Business School, part of the University of Oxford. NOW SEE A VIDEO OF THE COURTYARD