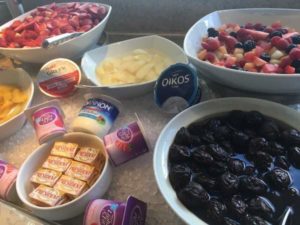 What does a top female bring to a luxury hotel group? Empathy and an understanding of people, says Jenny Cronin, President and CEO of the Marco Polo and Niccolo brands – and, in retrospect, the same could have been said about Katie Taylor, still missed by so many at Four Seasons (one level down, watch Tina Edmundson, who heads all 30 brands for Marriott, and Maryam Banikarim, who has the same role at Hyatt). It is the same, says the gal, at sea. Ask Serena Melani, the Captain of Seven Seas Mariner. On a full ship she is responsible for 700 passengers and 445 crew. 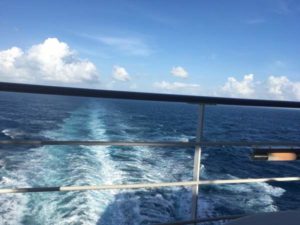 ..eaten looking back at the wake

She has a certain affinity for Angela Merkel when it comes to being called ‘mutti’ to her temporary sons and daughters, namely crew members, as this gutsy Italian likes nothing better than getting people around a table to discuss an issue (she does not like conflicts). She was born in Livorno, on Italy’s west coast, and she first went to sea, as a cadet, on a transatlantic roll-on-roll-off cargo ship at the age of 16. (What comes next? She does not want bigger ships, but she does hint that she might be ready for the next phase of her life, which could involve mountains and her love of art history, and perhaps having more time with her Croatian husband, currently captaining a Russian oligarch’s private yacht… until then she is blissfully happy, here as the captain of this beautiful ship, spending as much time as she can socialising with passengers, and looking after her crew.) 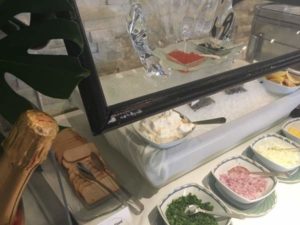 Caviar tasting at one breakfast

Captain Melani even finds time, before going to bed, to watch the ship’s enrichment lectures, always repeated on television. On this cruise we are not surprisingly having Caribbean and Central American talks, by a one-time Purdue professor, Charles Ingrao (this cruise company partners with National Geographic). Another company-wide partner is Canyon Ranch, which runs the onboard spas. One of the spa therapists, a Goan man, specialises in reflexology and I went to a lecture that turned into a fascinating description of how all the most important nerve endings seem to finish in the soles of one’s feet. Know how to massage the inner part of your heels, for instance, and it should help your back. 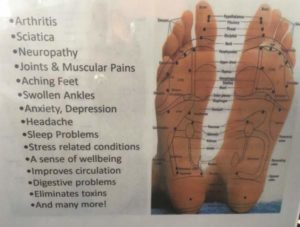 I subsequently got into a hot tub – there are three, out on the 11th deck – and started massaging the balls of my big toes, which is apparently where the nerve endings of the brain finish up. Sadly, my memory did not improve dramatically overnight so I will turn to food as remedy. The breakfast buffets here on board are magnificent: there is a health and fitness buffet, as well as the main buffet with an egg chef and full range of hot items and, on holidays, as I have already mentioned, the smoked salmon and gravadlax is complemented by a caviar station. And then I can sit on deck and look back at the ship’s foaming wake, something no land-set luxury hotel can offer.