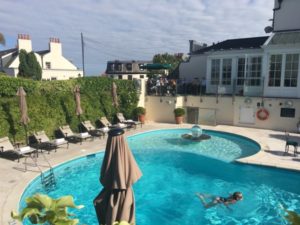 Look down at the pool

If there is one good luxury hotel it is worth going to any destination, says the gal, who feels extremely happy to have discovered Guernsey. Its signature hotel, Old Government House – universally known as the OGH – is worthy of top ranking worldwide, thanks to its history, the love and devotion given to it by its owners, the Tollman family, and its really passionate team, with resulting thoughtful service. Some of the views are spectacular. See the panorama from balcony room 109, above. You look down over other buildings to the English Channel and across to other Channel Islands: from left to right, you see Herm, then Jethou, Sark and Brecqhou (the private island owned by the Barclay family, of London’s Ritz fame). 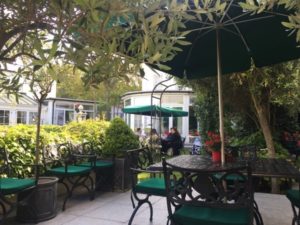 Tea on the Terrace

Old Government House, which is now a Red Carnation hotel, started life in 1858 as just that, the home for all government affairs, and after the Tollmans bought it in 2008 they elevated the entire product into a stunning 63-room hotel. The pool comes into its own in summer, as does the adjacent terrace, especially for afternoon tea and cocktails. Ah drinks. What used to be the Crown office processing Guernsey’s passports is now the Crown Club Bar, which has 37 different gins. Clever assistant GM Gareth Byrne had a sudden creative moment, and now you can get a Crown Club passport. Collect stamps showing you have tried all of those gin labels, at ten percent discount a time, and you get a free bottle of one of Guernsey’s two local gins, Blue Bottle by Three Fingers or hotelier Luc Wheadon’s Gin with rock samphire and pink grapefruit. 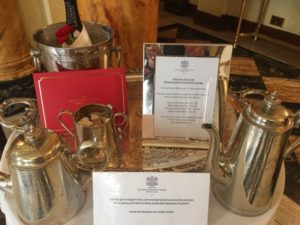 Tea promotion in the lobby

They know how to sell their drinks here. At weekends Crown Club suggests a lunchtime main course dish with unlimited Bellinis, Bloody Marys or Prosecco, maximum drinking time 90 minutes. At breakfast, in room service or in the charming pine-and-white striped Brasserie conservatory, they suggest a Moo-dy Mary, a Bloody Mary using Black Cow Vodka, a jolly-good breakfast wake-up after a night before: apparently it is made from a milk vodka distilled in Beaminster, on the mainland, not too far from another of the Tollmans’ Red Carnation properties, Summer Lodge. And I must not forget afternoon tea, outside on that terrace or inside, cleverly promoted by a set-up in the lobby, near to a bowl of rosy apples and a glass urn of fruit-flavoured water, and a carafe of sherry. 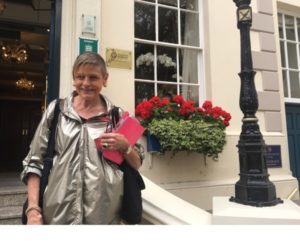 What else does this luxury hotel have? Well, there is a significant gym with good equipment and lots of outside members – but be warned, at weekends it does not open until 9 a.m. and, as I found to my cost, it closes at 6 p.m. I did not have time to try the spa. I did take a bike for a spin (both push-bikes and electric bikes, helpful on these hills, are free). I also loved my really aerobic walks. In the centre of town, up from the harbour, the terrain does not know the word ‘flat’ – this is a leave-the-heels behind place. They came out, by the way, for a high-society wedding the hotel was hosting during my stay. It had to be a local bride, by the way, as only the 87,780 registered Guernsey people can legally marry here. I was not able to find out if that right is extended to as many as six thousand Latvians who call this home. AND NOW SEE THE VIDEO OF ROOM 109