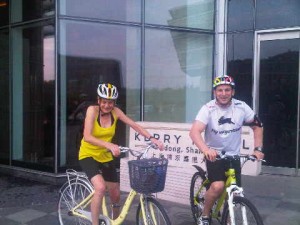 32,000 beer lovers are expected to descend on Singapore’s fourth Beerfest Asia, which starts at the Marina Parade Formula One track on Thursday (June 7th, 2012) and runs through Sunday.

One of the judges will be Shanghai’s champion craft brewer, Leon Mickelson, who learned his skills in his home town of Taupo, home of New Zealand’s most famous luxury lodge, Huka Lodge.  But the gal is digressing.  She is supposed to be writing about Kerry Hotel Pudong, Shanghai, but she was sidetracked…. 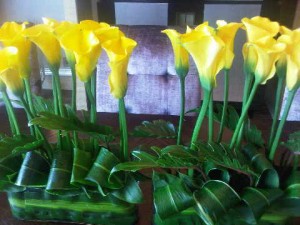 A bright welcome in room 2908 at Kerry Hotel Pudong, Shanghai

As has happened every hour of my stay at this eventful luxury hotel, a massive complex that comes with attached apartments, offices and lots of shopping.  There is something occurring every minute, from my arrival on.

The train finally nosed into Shanghai Hongqiao station and a thousand or more poured off. Many have meeters as well as greeters and I had two lots, from the International Luxury Travel Market ILTM, which starts today, and from the Kerry Hotel.

They had a civilized discussion in Mandarin and soon I was in the hotel’s Mercedes, its courtesy iPad all set to open up at www.girlahead.com 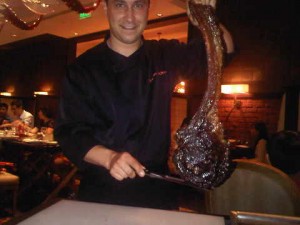 Thank goodness it was dinner time shortly after I arrived.  This hotel’s entertainment facilities are almost unbeatable. MEET (meaning meat rather than meet-and-greet) is phenomenal.

You walk into a room with a glass-walled ageing cabinet to your left and there is a two-kilo on-bone tomahawk steak with my name, and today’s date, on it.

You sit at your wood table, with brown leather place mat and heavy, specially-made steak knife.  You tinker with the idea of a first course but you know the meat, YOUR meat, is coming.

Chef Tobias Unger, a truly charming German, brings it over, holds it up by the bone, and then carves it up, down to the bone. Keeping a dish simple brings out its true flavour, he says with a smile.

Three of us, Peter with two Marys, start elegantly nibbling away, with more than the occasional sip of a Finca Pedriel 2006, a real Gaucho wine from Mendoza.  The meat, says Unger, has been in that ageing chamber for at least two weeks, if not more.  He serves it with bone marrow, and cooked cherry tomatoes – we add spinach, truffle fries, and oodles of appreciation (we could have added truffle-fried egg or foie gras, or one of the menu’s Mac selection, and we COULD have gone on to MEET’s icecream lollipops or baked Alaska).

Over our heads was a guard of honour of lifesize steer horns formed of hand-blown scarlet glass, an idea of designers Stricklandtribe, from Dubai. 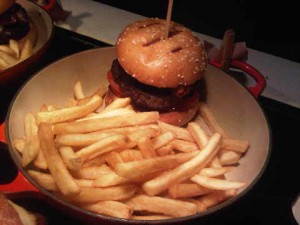 We could, of course, have dined elsewhere.  The hotel, which has 574 rooms,  has a 365-seat COOK all-purpose, all-day place, all-year (a different seat for each day) place.  You are given a swipe card which tells the servers at the 11 different cooking areas exactly where you are sitting.

This is where they claim to serve the best hamburger in Shanghai.  And here you get a free meal if you can down five portions of Malay laksa in an hour – so far, 25 have attempted it but only one, a reed-thin Chinese lady, managed it, and in 27 minutes. 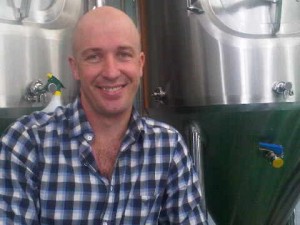 We could also have dined, inside or out under a tarpaulin, at THE BREW, which houses the glass-sided, three-floor craft brewery where Leon Mickelson, the specialist judging in Singapore this week, rules supreme – when he is away, by the way, his two highly-trained assistants rule the roost.

Later, he showed me round, explaining how he uses German barley, how he blends and what and when.  Upper level, he has eight stainless cauldrons fermenting 1,200 litres at a time.

In the basement, he bottles and stores, for use in the hotel (3,000 litres a week) and, free, in bedroom minibars – as yet, he has no liquor license to sell other than in BREW and the hotel’s other bars.

He regularly produces five beers, and often additional ‘specials’, and a delicious cider, all available by the half-pint, pint or three-litre, and your brew comes in unique, to me, double-sided hand-blown glasses with a vacuum between the layers to keep the beer cold. 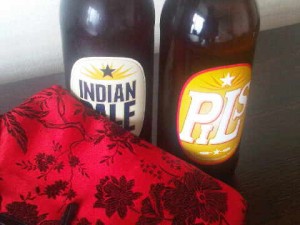 Home-brewed beer is offered, free, in the minibars

After all that eating, thank goodness Sydneysider Andrew West, who runs all the fitness for Shangri-La (parent of the Kerry brand) is also an early riser.  It was business-as-usual for him as we set off at six this morning for a fabulous 45-minute spin of local estates and little villages.

One moment you are looking at rows of Southfork villas, the next you are cycling along a canal where men, always men, are fishing. One has shown his Boy Scout skills by lashing bamboos into a holder for a giant net that he can simply raise up to check the catch.  We finish our ride alongside Century Park, about 100 acres in all and beautifully set out. 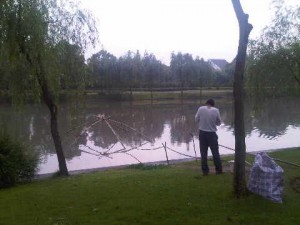 I can see it, indeed, looking down from room 2908, which luckily has access to the hotel’s lovely third-floor club lounge.  You help yourself to breakfast, including opening refrigerator doors to find real Greek yoghurt  (oh what a treat: other than Greece, Turkey and Eastern Europe, how I wish the rest of the world would abandon sweetened ‘fruit’ yoghurts and Go Greek).

Simplicity, again.   Anyone, regardless of room type, can go to the 24-hour fitness, one of the best in Asia, with an enormous pool as well as a football field of equipment: there are over two thousand members, half of them Chinese. 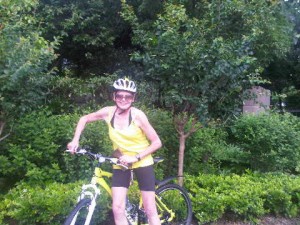 A brief pause by Century Park, across from the hotel (yes, we swopped bikes)

The sensible also go to the spa, which shares an arrival desk with the health club.  Linda led me along a corridor to my room, asked me to change.  In the closet there was a wrap-round (for facials), a set of pyjamas (for Thai massage) and without doubt the most cuddly and covetable spa robe ever, a soft-soft teddy-bear robe.

Put that on and you feel like Paddington without the sou’wester or boots.  I put on the wrap-around, Linda did her magic as I slept solidly, even without a teddy bear.  The happenings in this action-packed hotel continue.

Tonight there is a charity dinner, Boxing on The Bund.  There will be eight sparring matches – local expat bigwigs, apparently – and a thousand will enjoy a black tie dinner. Sadly, the gal will already be somewhere else …