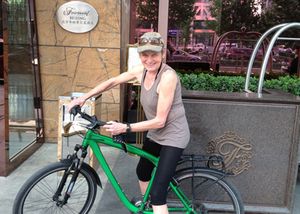 Beijing is really friendly to cyclists – though thieves are less friendly (it is said you are not a true resident until you have had ten bikes stolen).  My friend Michael Ganster took a bike to the supermarket, put on its big lock, did his shopping, came out and found – no bike.  Presumably, since he runs the luxury hotel that is Fairmont Beijing, he was able to telephone for help. The gal would suggest that one way not to have a bike stolen is either to ride one that is so old and rickety that no-one wants it anyway, or to paint it a kaleidoscope of colours so it is easily recognisable. 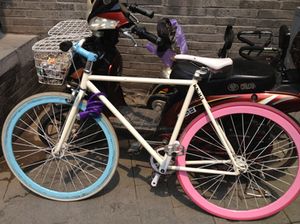 ..past a variety of wheels..

Like all Fairmonts, this hotel has BMW bikes for you to borrow.  Here they are green, perhaps an attempt to deter thieves. I set off, for the thrill of cycling in Beijing in rush hour.  The widest of the major streets have permanent dividers down the middle. On each side traffic flows, or crawls, in two or three lanes, in the right direction. On the outer margins are bike lanes, about 20 feet wide.  These are intended for, well, bikes going in the right direction, and motorbikes, and for buses swerve in to pick up passengers who, often controlled by marshals with flags, are standing in exact straight lines, ready to board. 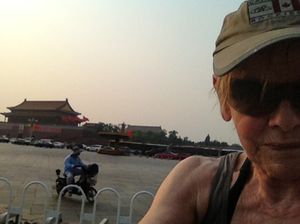 From the hotel I headed along just such a major artery, Jian Guo Men Wai Avenue, bound for Tiananmen Square. The challenge is that since you cannot easily get to the other side, because of that central division, bikes in fact go in any direction, to the left or the right of the ‘bike area’.  No cars dare enter this space, for some reason, but bikes do whatever they want, it seems.  At one point the bike area diverged from the car area and, more thrills, we were underground for about 200 yards, and then we emerged again.  After 30 minutes I got to Tiananmen Square, or, rather, to its edge as the centre is now cordoned off. 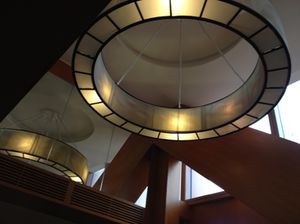 Looking up in the club lounge

After such calorie-consuming and nervous-energy exercise, it was a relief to shower and head up to the 20th floor Club lounge, a soothing series of rooms with high ceilings and the cross beams of the building’s exterior accentuated. This hotel is TripAdvisor’s top in China, and one reason is the Club manager, Leeann Hu.  Let me share an example. Someone needed a file printed out.  No problem, email it to her.  He got the print-out, five minutes later, signed it – it was an important contract – and Leeann then scanned the signed paper, emailed it to the recipient (copying the guest), smiling all the while. 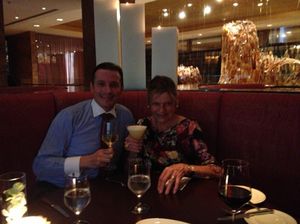 And after THAT it was dinner in CUT, with the aforementioned Michael Ganster.  We ordered an FBEI, which stands for Fairmont BEIjing, which turned out to be Martini glass filled with Hendrick’s gin, lemon juice, Red Bull and fresh egg white. Why Red Bull, you may ask?  Well, this hotel is owned by Dr Chanchai Ruayrungruang, who has the Red Bull concession for China (no mean concession since it is the staple of every taxi driver in town, and they have to drive eight hours a day merely to pay back rent for the vehicle).  Khun Chanchai also happens to have China’s first-ever Bombardier Global 500 BBJ B-LRW and in the Reignwood Tower, pink glass like the adjacent hotel, he has a La Scala copy, full size, where Sarah Brightman recently performed for his friends.  He also owns golf courses here and there, and a pet hotel and more. 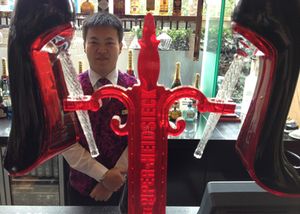 Finally? Champagne from a glass slipper (next time)

He should be jolly pleased with this (human) luxury hotel, which seems to win every award going, for hotel and food and service and spa.  After the FBEI, we went on to more usual concoctions, like a good glass of Aussie wine to go with Ranger’s Valley on-the-bone ribeye from New South Wales.  And then, on my way out, I spied another special. On the bar sits a Piper-Heidsieck tree, bright red plastic, from which hang real-size red plastic shoes with Victoria Beckham-height heels.  These, presumably, are for your bubbly (hold a heel, dear). What would an FBEI taste like, from a shoe? The mind boggles.  It is time to leave town…