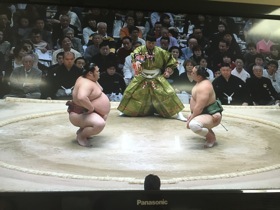 It was this television image of a sumo round that prompted the gal to think gosh, do not put on weight and, also, oh the power of green. This is particularly appropriate because so many of Tokyo’s luxury hotels only present muted colours, inside, and panorama of green, outside. Surely Park Hyatt Tokyo, edging Shinjuku Park, would offer some green solace? Looking at the sumo referee in his green kimono spurred someone into action. Let us look for greenery, both inside and out. As it happened Shinjuku Park was not looking at its best after winter, so therefore it was necessary to go green, within. 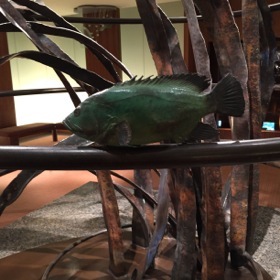 Immediately inside the hotel’s ground floor lobby there is an open-globe metal sculpture by British sculptor Antony Donaldson. I knew there was a fake bronze watch at its base – so many first-timers try to pick it up as they pass by. But only on this green hunt did I notice that Donaldson has incorporated two green metal fish into his overall design. OK, so far so good Up in the elevators, I admire the whimsical metal masks of animals high on each wall, but designer Mieko Yuki has not incorporated any green, here. At the 41st floor lobby, I emerge, in the dark, to illuminated trees bt let me see them later. 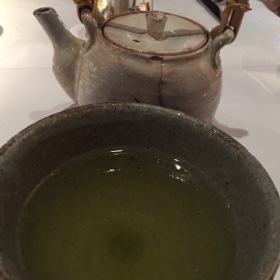 Another elevator takes me up to floor 48, with soft green carpets. Room 4801 has some green plants, and a set for making green tea. While I order room service I sip some tea and feel stronger, and walk around my place, like a cat making itself feel at home (this is always my ten-minute exercise when going into a hotel room for the first time). Very thoughtfully, the soap has already had its covering removed. Well done. I do not care about hygiene it is pure laziness that makes most housekeeping teams merely put out soap without thinking about the fingernails of hotel guests trying to open them. Typically, too, most guests need soap in a hurry. 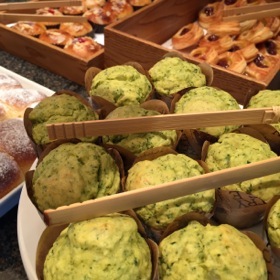 In the morning, I get into the 47th floor gym with one other pre-dawn exerciser. The gym is in two parts, flanking the pool. She takes one part, I take another. It is too early to see any greenery outside but later, showered and ready to go, I head down to the 41st floor Girandole and see, yippee, green tea buns (muffins)… this luxury hotel greenery quest is proving to be rather fun.