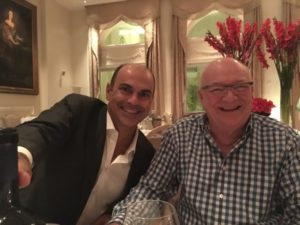 Athens is open for business as never before, says the gal, who is ecstatic at the passion and professionalism she found everywhere throughout her short stay. It was two years since the last visit, and a lot has changed. A new realization means that even more attention is paid to customer experience and individualism – Tim Ananiadis, who runs the GB (Grande Bretagne), icon not only of Athens but of Greece, and one of the most outstanding hotels anywhere, points out again and again how important it is to remember regular guests at afternoon tea, for instance, and instantly bring the food, and type of tea, they like. And if you do not want tea, choose the coffee and brioche, a remarkably good bargain at €10, three types of coffee, three types of filled brioche – beef, salmon or caprese, or with a two-bite salad. 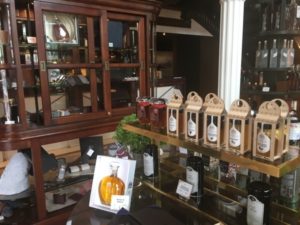 Of course being the GB you can be quite sure that all the female servers look like Gucci models, with exquisite hairstyles, some Renaissance style, complementing their chic black frocks. All this is rather confusing, as I am sitting with a group of friends who actually include Gucci creative stylist Marija Adamovic, who perfects her art at the rue Royale store in Paris (I should have asked her what she thought of the servers). It was a great group, that evening, which of course included Tim and Jennifer Ananiadis, and his deputy Gregory Liasides, and the king of Australian fine food, Simon Johnson, who now has seven eponymous stores, and also my new friend Mr Bryde. This is a certain Paul Bryde, whose main impact is as one of the best story-tellers anywhere 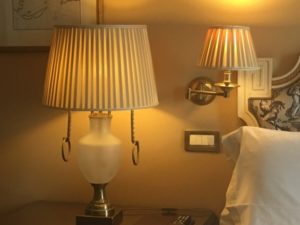 Perfection in colour and mood, bedside

It was Gregory Liasides, by the way, who, with Tim Ananiadis, has done one of the cleverest conversions of a hotel space I have seen for a long time. GB Corner was the casual restaurant off the south-east corner of the hotel’s lobby, facing Parliament and Syntagma. It has big windows in both directions. Not surprisingly, during the Greek Crisis, customer numbers fell back. As it happened the hotel had, for two years, been running a pop-up store in a local high-class mall, during the week between Christmas and New Year. Why not turn GB Corner into that pop-up, full-time? The result is sensational. The existing bar corner still sells coffees, macaroons and the like, but tables and chairs have been replaced by really stunning couture (love the Zeus+Aione shoes and belts!), and gourmet foods, like low-sugar Menalon vanilla honey from black firs on Mt Menalo, in the Peloponnese, and thyme honey from Makronissos. 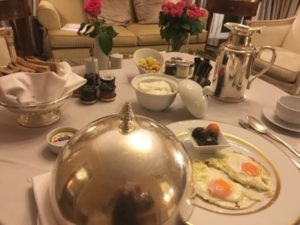 Soon there will be wine-tastings too, in the gallery above GB Corner. Really, this is a luxury hotel that is so imaginative, and does things right. I excused myself from the hilarious dinner as I had a four a.m. wake up, and, guess what, my five o’clock breakfast arrived not only on the dot but with a flourish. Another of these gorgeous lady servers – dressed, at that hour, more Grand Hotel Budapest than Gucci – wheeled in a trolley of goodies, my eggs under a silver cloche so new and shiny it would have shown up any face pimples if I had them. And the yoghurt, of course, was Real Greek, and the coffee, no brioche of course, was full of flavour. And, down 55 stairs (I carried the Porsche Rimowa wheelie down, for exercise) the Mercedes waited and I dreamed happily ever after, or at least until we got to the airport. I will be back, and so should everyone else. There is every reason to rush to Athens, now. NOW SEE THE VIDEO OF PERFECT-SUITE 614, BELOW