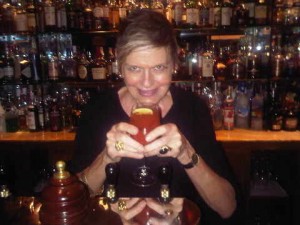 Well, try anything once to immerse oneself in the locale, gal, and of course in any St Regis it is essential to try the house special, the hotel’s unique version of the Bloody Mary that is said to have originated in the first St Regis in New York.

At St Regis Beijing, the drink is the Great Wall Mary, made without any vodka at all.  Put some ice in the glass, add tomato and lemon juices, Tabasco and Worcester sauce, and Qingdao beer.  It is remarkably refreshing.

Drink one in the historic Press Club Bar, a ground floor panelled haven that, in pre-digital days, acted as magnet for journalists who had nothing else to do all day and night long but talk and talk and then go home to write. 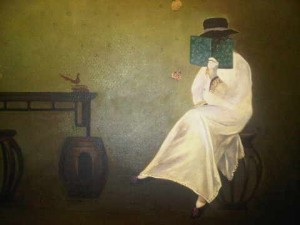 This luxury 286-room hotel is a haven for the senses.

Learn more about wines while you are here.  The Press Club Bar hosts free nightly wine-tastings, 1730-1900, for hotel guests.  Tonight the wines are a Station Road Sauvignon Blanc 2008 from New Zealand’s East Coast – I am told that for some reason New Zealand, plus Australia and Chile, find their wines are subject only to 20 percent import tax, while if you want your Chateau Lafite 1992 or even a bottle of Bulgarian plonk the importer has to pay 40 percent.

The red tonight, by the way, is an Argentian Malbec, Terrazas do Los Andes Reserva 2009. The Press Club Bar hosts nightly jazz raves by the Back Yard Band from Kristiansand, Norway, all this June. 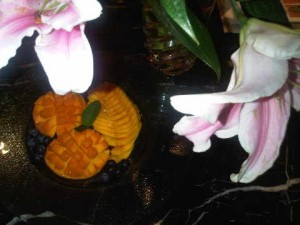 Sense of smell, sense of taste.  This is apparent too when I go up to room 1916, on the top floor.  Designer Alexandra Champalimaud, the genius who waved her wand over the Bel-Air in Los Angeles and so many other fabulous places (including Two-E in The Pierre, a Taj Hotel, in New York) has had fun with this one, themed a China Suite.

It has padded-silk walls on which are hung Chinese prints, say of ladies making music, and the six white dining chairs are Mandarin-meets-Amish. 1916’s generally-invisible butler (thank you for keeping out of the way) has apparently telephoned colleagues in Singapore to find out my idiosyncracies.  He, Tong Zhu, has put out a plate of perfectly-cut, perfectly-ripe mango, which sit under a big bowl of perfect lilies.  Thank you, butler. 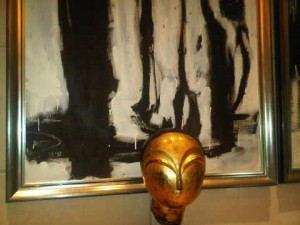 Sense of artistic appreciation.  1916’s wall art is necessarily small – when the Kwok family’s Sun Hung Kai Properties constructed this building as the Beijing International Club, replacing the original 1911 Club, they for some unfathomable reason thought all ceilings should be five inches lower than many, especially Yao Ming and other basketball stars, would like.

Elsewhere, the spacious public areas, where ceilings rise to mega-height, artworks are mega-sized.  Up on the first floor, an extension of the two-floor lobby’s upper gallery, a gold head sits in front of a blown-up black brush-stroke work. 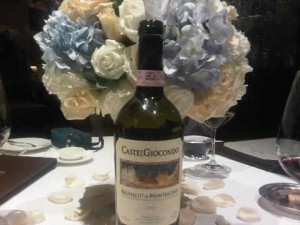 Sense of wonder… go into that lobby, on the site of the former Beijing Club’s outdoor swimming pool, and you gaze up at nine clusters of black-shade lights set as chandeliers, with eight lights at top, twelve below, and 16 below that.

Thanks to a mega-enormous mirror at the far end of the lobby, the chandeliers are doubled by reflexion.  You feel there are 12, not six, clusters above you.  You wonder – how do they change a light bulb?

We climb up 34 polished-to-glass marble stairs from the lobby to its upper gallery, which also acts as overflow for diners in the adjacent Danieli’s Italian restaurant who prefer to eat out there, looking down at the movers and shakers in the lobby.

We dine in the main room, at a table magnificently embellished with flowers that should be immortalised as finest porcelain.  We eat trattoria style, great caprese followed by bistecca fiorentina with spinach.  This is ‘real’ Italian food, more of Il Mulino style, as at Acqualina on Sunny Isles Beach.  Finish with raspberry panettone or sorbets. 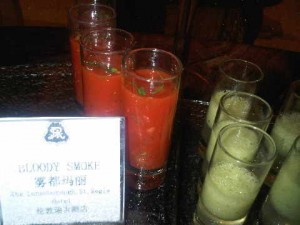 I am with Norwegian GM Yngvar Stray and his wife Julia, who administers the Norwegian association for the 250-odd expats here in Beijing. We talk of St Regis hotels around the world, including The Lanesborough in London, which many sometimes forget is part of the brand – amazing that Geoffrey Gelardi has run it since its 1992 opening and he still looks just out of school.

Coincidentally, the next morning the breakfast buffet includes a Bloody Mary shot-of-the-day, and today it is the Bloody Smoke Mary from The Lanesborough (perhaps this is a Gelardi elixir of youth?).

Chinese guests, by the way, must have buffets, and they and their chopsticks shovel the noodles and other delicacies in at rate of knots.  The Chinese, apparently, have taken the idea of a wedding breakfast literally.  First weddings are held 0930 to around 1300.  If you must do it again, second time round, you go for the evening. 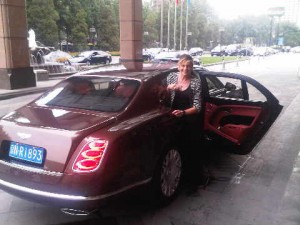 The final sense here, at this hotel, is that of sheer beauty.  I am ushered into the hotel’s new Bentley, a copper hue with burgundy interior.  We glide off for what turns out to be a stellar performance.  The traffic is a criss-cross, with every vehicle, be it bus, car, motorbike or push-bike, all trying to go in any and every direction.  In this gridlock, most people look across at the Bentley in awe.