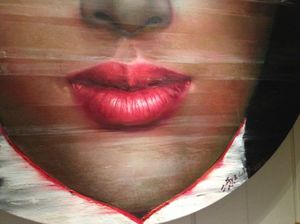 Stupendous art maketh man, and certainly woman. The gal has no idea who the artist of this piece is – it is about eight feet tall, in total, and is one of the glorious pieces at the Chinese capital’s newest luxury hotel, Waldorf Astoria Beijing, designed by Yabu Pushelberg. Even the exterior is an artwork, a sculpture of architecture, a dark grey glass cube, 12 floors high, its 90-degree corners bordered by seven-foot-wide bronze protrusion. Inside, there is a criss-cross, at right angles, of ground floor corridors. At the end of one of these is this painting – only a section is shown here. 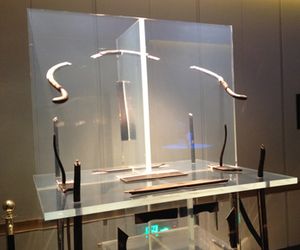 Look around the 171-room hotel, indeed, and designers Yabu Pushelberg have hung and exhibited some really original one-offs. There is a map of the Forbidden City, done with a palette knife working with shades of grey. What looks like a brush painting of old Chinese mountains is a collection of black pins set in just-so. There is a piece of lucite with bits of horn sticking through it. This, believe it or not, is a chair, by an artist called Shao Fan, who sells at galleries in many countries. Before the hotel opened, Xianliang Temple was on this site. Presumably those people merely sat on the floor. 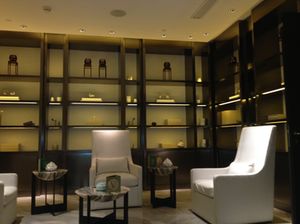 Interestingly, Li Hongzhang, who signed the Sino-French Tianjin Treaty in 1885, lived in this temple.  He made his first visit to the USA when he was 74. He was the first Chinese to visit the then-new Waldorf Astoria New York, so it is appropriate that the now-owners of this land, the Cofco food conglomerate, should have wanted their hotel here to be Waldorf Astoria. They have invested heavily. There are comfy chairs on all elevator lobbies, and in the bar and lovely all-day Brasserie 1893 restaurant, and in the library, where afternoon tea is served (Cofco have saved a bit of money, the books in the library are actually merely covers, with plain paper inside). 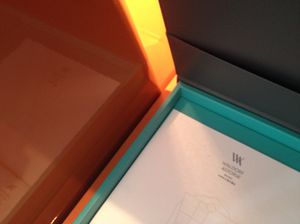 Everywhere else, however, they have spent. Bedroom closets, to give one example, have doors that are black lacquer outside, orange lacquer inside, with interior panels of pale grey silk – umbrellas stored here have their own silk covers. There are lacquer bits everywhere, with doors and drawers that might be fake, might be real. I open one such door to find a fixed writing desk inside, with a beautiful box holding stationery, the notepaper printed with a scarab-like outline that presumably means something from time of yore. The bathrobes are the most luxurious, I am sure, that money can buy. 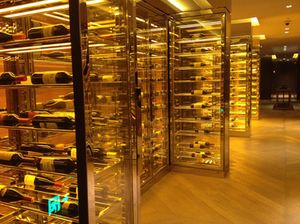 The GM, Marlene Poynder, is from Perth so obviously we had to have an Australian wine at dinner, in Brasserie 1893, named for the birth of the Waldorf Astoria brand. We drank Torbreck Woodcutters Shiraz 2011, Barossa Valley – OK, we could of gone China-local, say Tasyar Release Chardonnay 2010 or Silver Heights Family Reserve 2011. But we did not, so we talked Australia – and quality and Egypt. Why Egypt? Well, Pieter Ham, who heads food here, said he had worked at the Cairo Hilton, we both thought of Jean-Pierre (JP) Mainardi. He is here, says Pieter, for an event. Go and get him, please. Sure enough, the most dapper Frenchman in the whole of Egypt came round, to join us for just about enough time to drink a thimble-full while telling more stories than most relate in a lifetime (talking of wine, the hotel’s Chinese restaurant, which of course has masses of PDRs, private dining rooms, has an outstanding glass-walled wine cellar, so beautiful it looks like yet another artwork). 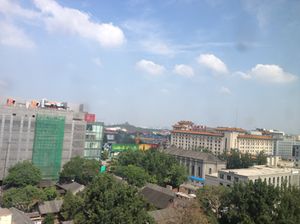 This is a very special luxury hotel where everyone, it seems, wants to excel in sharing their passion for it. Charlie Peng, who showed me round, explained how he plans to get married in the Chinese restaurant, probably November. A young spa therapist from Hunan came in an hour earlier than usual so she could give me an outstanding once over, leaving me feeling, if not actually looking, ever more the successful girlahead. I need to come back, for more of Ms Hunan’s treatment, and a good swim.