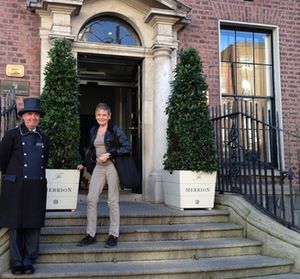 Doorman Tommy at The Merrion

Welcome to The Merrion, says doorman Tommy. The gal is on a short tour of Ireland, kicking off in Dublin. She wants to compare luxury hotels’ entrances.  Here, leading off Upper Merrion Street, is a formal city doorway, typical of the area. It is most likely that the Duke of Wellington was born here, in 1769, as this was the town house of the first Earl of Mornington, though later his mother, the eldest daughter of the first Viscount Dungannon, thought he had been born elsewhere (you would think she would know but she did have five sons, of whom the Hon Arthur Wesley was fourth). 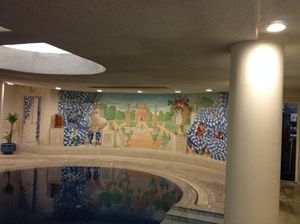 Looking towards the end of the pool…

After flying into Dublin airport an hour late, I was met by a driver who said ‘never mind, I had time for a couple of Guinness’. Nothing the Irish like more than a good joke and a good story. What I wanted more than anything, when I got to The Merrion, was a good swim. The basement pool has an end trompe l’oeil that is on a par with that of Le Bristol in Paris, and Chewton Glen Hampshire. It is gorgeous, and there is always fruit, and jugs of fresh orange juice, for recovery. A few others padded around in white bathrobes.  Perhaps they are preparing for Dublin’s marathon tomorrow. 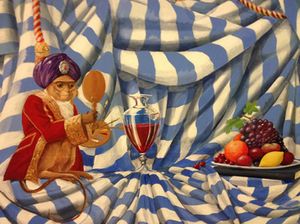 Let us look at the story on the pool side in more detail.  To the right is a monkey. I try to research the symbolism of monkeys in art.  The Courtauld in London says monkeys always add a note of improbability to art. Monkeys in stately homes brings up nothing.  Monkeys as pets only refers to the thousands in the USA who view monkeys as substitute kids (you can buy one from anything from $1,500 to $50,000). So, back to this art work. I concentrate more on the food, and am jolly pleased that this historic hotel, so associated with the Duke of Wellington, is heavily involved in not only the right types of food but Irish produce. 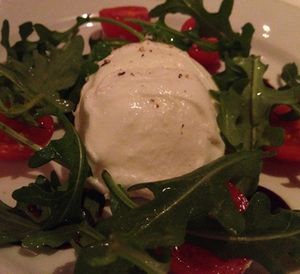 I dine in the Cellar Restaurant, a lovely casual place – the adjacent Michelin-starred Restaurant Patrick Guilbaud is closed tonight.  I start with one of my favourites, a caprese, but this one is different. The mozzarella is from the Toonsbridge Dairy in Co. Cork, started in 2011 by farmer Johnny Lynch and his neighbour, Toby Simmonds, founder of the Real Olive Company. They brought some water buffalo over from England and, hey presto. It is served with dribbles of balsamic vinegar produced by David Llewellyn, from Lusk, Co. Dublin, who apparently also produces a range of juices, cider, cider vinegar and Lusca Irish wine. 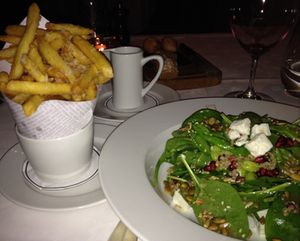 Next comes another starter, what they call The Cellar Super Salad.  Gosh this must be good for a growing girl.  It has baby spinach, pomegranate, feta, quinoa, broad beans – and I replace the listed cider vinegar dressing by olive oil. Of course this is perfected by the most delicious crispy truffle and parmesan skinny fries that you can possibly imagine. Oh what a healthy dinner.  Anyone would think I was one of the 14,000 getting ready for the marathon tomorrow (there are one or two skinny middle-aged men loping around in skin-tight lycra, their hair shaved to nothing to cut wind resistance).  After that, it is take-the-stairs – yes, of course they have elevators but this is marathon-fit time – to suite 392/4, where the Obamas stayed. 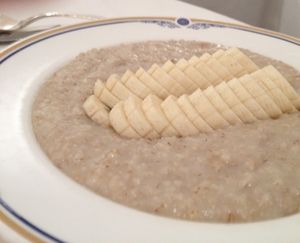 .. and a pre-marathon breakfast (porridge and banana)

I breakfast with a friend, who has the ideal marathon breakfast, Irish porridge (oats) with banana.  He does not look as if he is going running – he is wearing a suit and tie.  He tries to tell me he has an important meeting, which turns out to be on a golf course.  You know perfectly well that many staying in this gorgeous 145-room luxury hotel – a long-time Leading member – are VIPs.  According to today’s paper the IMF officials who have successfully helped Ireland rise out of its economic doldrums have more or less been living at The Merrion, and paying the full rate (did they have time to use the lovely pool?).  I read that the man who identified the economic power of the BRIC nations is now switching to the theory that cities, rather than countries, will be trend setters.  At the rate The Merrion is going, Dublin could be in the top list. Well, think Rabobank’s ACCBank, Allied Irish Bank, Amazon, Apple, and you still have another 25 letters of the alphabet.