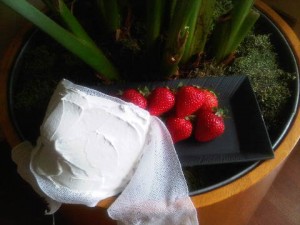 Conceptual art by the gal, strawberries and a plaster face mask at Grand Hyatt Tokyo

What is grand, gal?  I found grandness in Bonn as I rushed through the former German capital on my way here, to Terrific Tokyo.  In Bonn, on the quiet bank of the Rhine, the luxury Leading Hotel of the World Kameha Grand has only one sign over its imposing main entrance – Life Is Grand.

Here in Tokyo, there are two fabulous Hyatts. Park Hyatt Tokyo, in Shinjuku, is the one that is known forever for Lost In Translation.  Grand Hyatt Tokyo, in Roppongi, is known forever as more flash-and-dash (with a lot of water splash) and masses of art.  I tried creating my own art.  See the first picture.  Strawberries and cream?  Not a bit of it.

It is a collage, specially for you, created from the strawberries waiting tastefully in corner suite 2020 and the real plaster mask that was part of my fabulous, worth every second, 90-minute Spring Glowing Facial in the hotel’s idyllically calming Nagomi Spa, designed by hot-stuff Super Potato.

Sometimes even the busiest person needs to stop. The whole wellness side of the 387-room 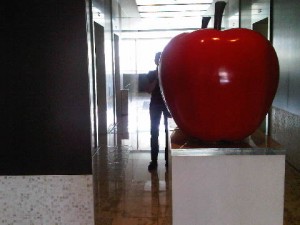 Grand Hyatt Tokyo hotel is designed by Takashi Sugimoto and his Super Potato colleagues.  Walk in to the fifth floor complex and you go past the glass-walled length of the 65-foot pool with its inset hot tub.

Ahead, downstairs, is the spa.  Ahead upstairs, up glass steps, is the gym.  As you approach both you see legs of those working out on the Technogym ellipticals, up and down and round about.  All that energy of others calms one.  And the subsequent facial really does the trick.

You are wrapped in a cocoon of soft linen and duvet and you sleep like a baby, despite having wet plaster daubed on a face that is only protected by gauze (apparently the plaster releases facial muscle tension).  Afterwards, it was all-go. An apple sculpture by an elevator bank inspired creative photography. 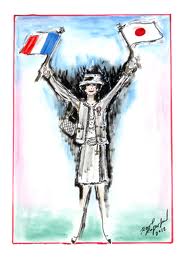 Both Hyatts work together when it comes to creativity – this very weekend both GMs, Christophe Lorvo of the Grand Hyatt and Philippe Roux-Dessarps of Park Hyatt, are taking part in a triathlon at Ishigaki.

They feared it might be postponed as it is on the flight path of where North Korea’s missile would have gone but that fizzled out, as we know, so the triathlon is on.  Yes, they are always working together.

Last month they jointly hosted Chanel comes to town.  Karl Lagerfeld made his first visit back to Tokyo for 17 years and he talked French history and lots of other things, including lots of promotion for his next book, The Little Black Jacket (jointly written with Carine Roitfeld, and being published this September).

He brought with him such luminaries as Vanessa Paradis and Sarah Jessica Parker and his muse, Amanda Harlech, and all the Vogue editors (100 media in all) and Alice Dellal and a jumbo crowd of models, and hairdressers.  He also brought his entire recent Paris fashion week show.

Just as in Paris, he showed it in an A380-sized ‘plane cabin’ mockup (just like the brilliant British Airways’ popup 2012 restaurant that closes, sadly, today); here in Tokyo they put the cabin mockup in Shinjuku Park, for the same show.

And then, for the first time in its 17-year history, Park Hyatt Tokyo closed its 52nd-floor New York Grill for a private Chanel party. All this was masterminded by Chanel’s man in Japan, Parisian Richard Collasse, who speaks and writes fluent Japanese and is himself a published author. 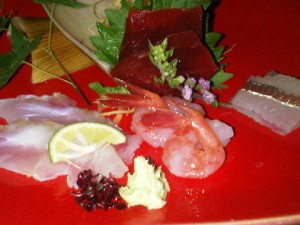 So Grand Hyatt Tokyo had all those journalists for four nights but it can cope.  Vogue worldwide held its editorial pow-wow here last October and the differences between the stylish editors of, say, the US edition (English-born Anna Wintour) and the French and Italian editions, and the mumsy looks of Alexandra Shulman, who edits UK Vogue but also writes down-market everyday fashion for The Daily Telegraph, meant one service approach did not fit all.

You had to know each journalist’s idiosyncracies, says Christophe Lorvo with a diplomatic smile – and then he starts enthusing about his experience of the 2012 Tokyo marathon, which he ran with 35,999 others, chosen by lottery.  We were dining in Roku Roku, also designed by Super Potato.

This is a haven of honey-coloured wood, with a prominent counter where chefs diligently prepare and serve sushi.  We sat at a circular table made of a big slab of polished cherry wood, with an internal tear ‘tied’ by two neat inset ‘bows’ of slightly darker wood.

The sashimi tasting came on a scarlet plate, and then we went on to tempura, and a tasting of sushi, and miso soup. There is a championship selection of sakes available but we talked Japanese winery owners in California.  There is Tom(ohiro) Kisaichi, who with his wife Rebecca Kisaichi owns and runs Maboroshi in Russian River, but the best-known is Kenzo Tsujimoto, ceo of Capcom USA Inc who bought the 4,000-acre Wild Horse Valley Ranch, above Napa, 20 years ago but only in 2010 unveiled his $100-million Kenzo winery.

This is overseen by flying winemaker Heidi Barrett and produces one white, Asatsuyu, but three red labels, Ai, Murasaki and Rindo, and 50 percent of the entire production is exported to Japan. 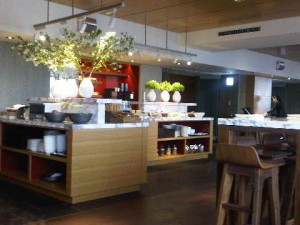 Back to the hotel.  Just what DOES make something grand? The Presidential Suite, which is a massive 2,600 sq ft, has its own 30-ft heated pool on an extremely private balcony. More friendly, actually, are the rooms and suites that have access to the club lounge.

Here, the club floors are called Grand Club, and the tenth floor Grand Club Lounge seats a massive 118.  The room seems to stretch for ever.  As with all Hyatts in Asia Pacific, where the food product is masterminded by a genius called Andreas Stalder, it is deliberately casual, but with style.

You, the guest, open up glass-fronted cool cabinets to help yourself to juice, yoghurt.  It is just like home, self-service, with style.  You can order hot stuff, Western or Japanese.  The breads are fabulous, real wholesome flour with lots of seeds and other healthy bits, and the coffee is great. 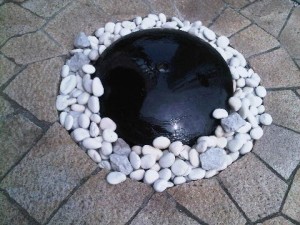 Dome trickle-fountain on the terrace of the Grand Club Lounge

Until May 17th, 2012, this is also the only hotel in town that has a lovely outdoor garden terrace attached to its Club Lounge (on that day, The Palace re-opens and, having had an exclusive preview – watch this space – I can reveal that it too has a club lounge with an outdoor terrace).

Grand Hyatt Tokyo’s Club Lounge garden has greenery, and seating, and a dear little water feature, about 20 inches across, exactly surrounded by perfectly-washed river pebbles.  Oh there is so much art here… down in the lobby are a pair of ten-foot tall anthropomorphic shapes, white with black parts.

One has the indications of a face, the other is plain.  Both are by Jun Kaneko.  Interestingly, the hotel’s art was sourced and chosen by consultant Neal Menzies, based in Los Angeles. 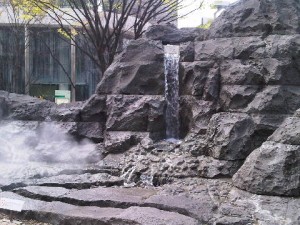 Outside the main front door of Grand Hyatt Tokyo, a mini-mountain sculpture by Cai Guo Qiang

There is always something happening in the mini-city that is Grand Hyatt Tokyo. On May 22nd, 2012, for instance, Manolo, king of the gypsies, will be singing (he was mentored by Jalhoul Bouchikihi, founder of the so-called gypsy kings).  But now the car is waiting, for the rest of the day to unfold.

Right outside the main entrance of the hotel is a Disney-like stone mini-mountain, all of six feet high.  It erupts smoke, and water billows down from its summit.  This too, apparently, is an artwork, by Cai Guo-Qiang, and it is emblematic of onsen hot natural pools.  It all adds to the atmosphere of a grand departure.