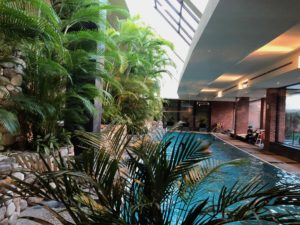 When a hotel is as large, prominent, and well-established as Grand Hyatt Seoul, there are lots of responsibilities. Since 1978, this hill-top building, a gentle 20-floor crescent on 20 acres of Yongsan land, has dominated this part of town. Everyone in the area knows it, has used it and still uses it. Every winter families come to the outdoor skating rink (it is such fun, says the gal, looking down at the rink, illuminated until midnight, as above). Year-round, regulars swim in the indoor pool, providing a ying yang experience, swim as if in Hawaii, as shown on left, or go directly outside, to the skating rink. There is something for everyone. 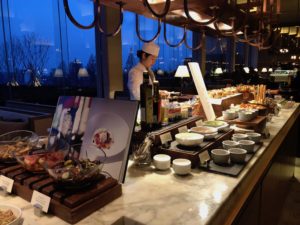 Tapas buffet in the lobby

Not surprisingly 55% of hotel rooms business is domestic, and these people, as well as the locals who have come here regularly for up to 40 years, always want something new. Trust hotel GM Adrian Slater, and his colleague, Hyatt Asia-Pacific’s food guru Andreas Stalder, to come up with innovation. The hotel recently re-designed its lobby lounge. Yes, it still has a superb Filipino quartet, live every evening, but now the lobby hosts two elegant and bijou buffet tables, one offering a variety of tapas, the other specialising in desserts. Of course, wearing my devil’s advocate hat, I have to say ‘why has no-one thought of this before?’. The most important thing is to say well-done Mr Stalder, and also Hyatt. 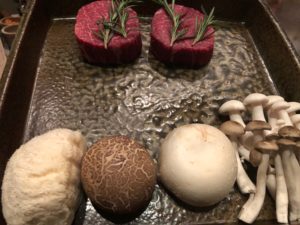 Grand Hyatt Seoul used, among its many dining options, to have a Paris Grill, down steps from the main lobby. This has gone and is now the delightful and spacious Grand Club, open from 6.30 a.m. but, sadly, I had to leave at 5.30 a.m. (for the record, 4.45 a.m. room service was 10/10, on the dot, crisply starched linens on a table wheeled in by a smiling local waiter who realised I did not want or have time to talk, and the seven-grain toasting bread was the best for a long while). I had dined in Teppan, one of the newly devised restaurants. This cleverly has two C-shaped tables, which makes it possible for a partial as well as a whole buy-out. One memorable feature is that your chef first presents the ingredients, on a tray. 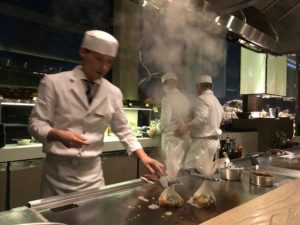 Cooks at the ready

Above left you see, for two people, the Jibo tenderloins AS+, and the portobello, which will be cut in half, and cooked with other mushrooms. The result, thanks to skilled chefs who operated as divas with the personality of your long-time best friend, was superb, as was the whole meal. My dinner was Hungarian foie gras on brioche with local strawberries, then a pan-seared scallop topped with uni sea-urchin, then a clear papillote holding merou and much more, and, I thought, finally the beef (I did actually go on to fried rice with beef, black sesame and fried egg but I honestly did pass on the set-meal’s finale, banana flambéed and served with rum and raisin icecream). Thank goodness the gym at this luxury hotel is 24/7 as I needed that workout before my 5.30 breakfast! NOW SEE VIDEOS OF THE LOBBY BUFFETS, AND ROOM 1956