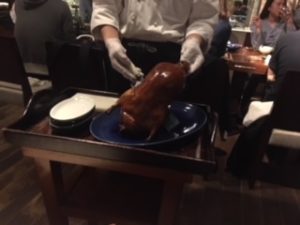 There are some who head to Macau for the tables, and they never see the glory of, say, the City of Dreams complex at night (see above). Some, apparently, are so addicted to their favourite game of chance that they do not even check in to the room a casino might be giving them, which means that canny hotels can sometimes ‘sell’ a room twice. The first buyer is a casino operator, paying the hotel operator a special rate. Next buyer is someone not being hosted by a casino who decides it would be a good thing to find somewhere to sleep. The gal was fortunate to get a fabulous end suite at City of Dreams’ Grand Hyatt Macau, managed by Hyatt. Of course there is always the thrill, here, of seeing the stunning metallic ceiling hung mobiles, both by Danny Lee, in the hotel’s lobby. There visit there was to be the added joy of a metaphorical PhD in Pekin duck. 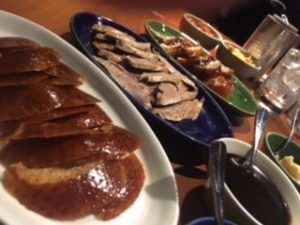 ..into plates of crispy skin, flesh, and combination of both

Grand Hyatt Macau’s 225-seat Beijing Kitchen, which is open lunch and dinner, gets through 35-40 whole ducks every day. Only ducks from Beijing will do, says my teacher, Paul Kwok, GM of this 791-room hotel – he did a tasting session of birds from all over China and Beijing won, hands down. They must be cooked hanging over burning date palm wood for about 45 to 60 minutes, and carved tableside. Here, at Beijing Kitchen, the carved meat is presented on three plates, holding skin-only, flesh-only and skin-plus-flesh. Paper thin pancakes, in a silver container, are speedily replenished. Take a morsel of duck, put on a pancake, add some slivers of celery and spring onion and a little hoisin sauce, and before you know it the entire duck has gone. SEE THIS VIDEO AND THEN CONTINUE WITH THE STORY, BELOW 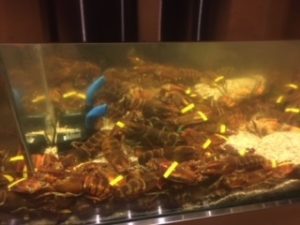 Hyatt is synonymous with good food, especially in Asia-Paciifc, where the culinary guru, Andreas Stalder, has been a legend for years, and he is still right up there. Mezza9, which he created for Grand Hyatt Singapore, has been copied by many, thinking that all you need to make a hotel restaurant successful is to have lots of different cooking stations offering a variety of cuisines. This is not true – you need Stalder style to make this work, and even he will evolve. Mezza9 Macau, here in Grand Hyatt Macau, has recently evolved from food brought to you. It is now come-into-our-kitchens, concept, and guests are invited to wander in and out of the cooking areas. Yes, it is working. Numbers of diners have upped from average 40 to about 170. 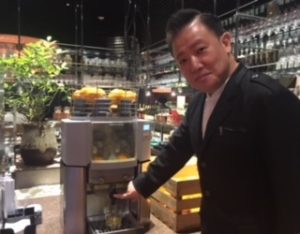 Paul Kwok is a bundle of energy, which I really like in hoteliers. He tells me about his Christmas trees, 33 of them in all set variously around public areas of this luxury hotel. The same metal frames are used every year but they are ingeniously decorated with recycled stuff, say one tree is covered in thrown-out handbags, another in rolls of old newspaper. 16,000 discarded bottles, from waters to Champagne, have been stored this year for tree decoration. He showed me so much else, too – high stools by front desk are much appreciated by those waiting to check in – some sit on a stool, some lean against it and some simply place a handbag, not discarded, temporarily on it. And, what innovation, he showed me the Zummo vertical juicer, from Spain, that breakfast guests can use to make their own juice. Indeed, after my own superb breakfast in the hotel’s enormous 37th floor Grand Club – see the video below – I went back to Mezza9, to see Zummo in action.