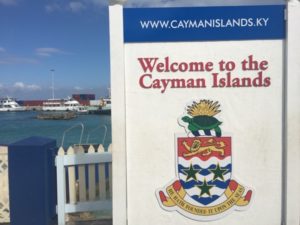 Welcome to the islands

The Crown Colony of the Cayman Islands has a mere three percent unemployment, so how on earth do they cope – especially when so many of the 58,000 population are involved in tourism? During high seasons at least two cruise ships come for a day visit, bringing in 1.6 million short-term visitors a year. Why would any luxury hotel want to be here? Well, Ritz-Carlton, a ten-year veteran, now has a significant competitor, Kimpton Seafire Resort & Spa, Seven Mile Beach, on Grand Cayman, the largest of the three Cayman islands. This new hotel beauty is really fun and stylish, says the gal. 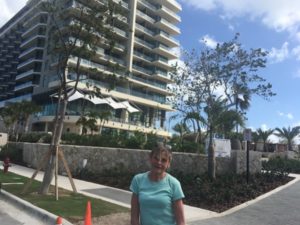 The 266-room hotel, which will have 62 residences in a separate building, is owned by Dart Realty, which is part of Ken Dart’s empire (Dart, whose ancestor William Dart founded the paper-cup empire of Dart Container Corporation in Michigan in 1937, renounced his US citizenship and now has passports for Belize, the Caymans and Ireland – he owns around 22.25% of all Caymans’ real estate, a fund that buys distressed government debts from such nations as Argentina and Greece, and he is worth over $5 billion). This is Dart’s first hotel, and I hope it will not be the last. 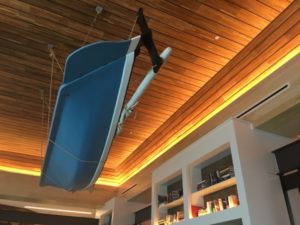 A restored Cat Boat hangs from the library ceiling

It is also the first Kimpton outside the USA, thanks to a doorman at one of the group’s US hotels taking pity on a Dart team member, not staying there, walking past in pouring rain (‘Would you like an umbrella?’). I said it is a fun hotel. Designers Powerstrip Studio, namely Ted Berner and Dayna Lee, have used wood-look ceramic for much of the flooring, and real wood for some ceilings. In the well-stocked library, which has lots of silver-framed old local photos, a real Cat Boat hangs overhead, named Miss Ola after the wife of the man who painstakingly restored it – see the video, below, for more of the library. 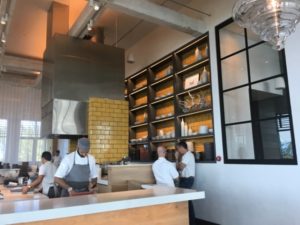 There is fun eating here, too, at this new-look luxury hotel. The all-day Ave, which is indoors- out, has an inner show-kitchen area, Avecita. Instead of the usual beach restaurant, GM Steven Andre explained that he went for a Mexican beach shack, Coccoloba, which seems to be packed both at lunch and dinner, partly because there are so many residential condos in this part of Grand Cayman. I also loved the look of Pantry, a to-go coffee corner leading right off the main lobby, and there the team were smiling away, as were all of the 400-total I encountered. It might be difficult to find employees here but someone has done a jolly good job in achieving not only the number, but hiring those with the right attitude. NOW LOOK AT THE LIBRARY